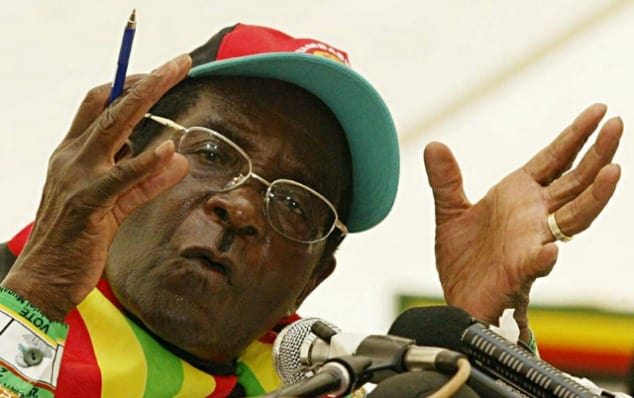 The mostly controversial president of Zimbabwe, Robert Mugabe (pictured), who turned 90 on February 21, stirred yet another controversy at his birthday luncheon. During his remarks, he called out Nigerians and referred to the country and her citizens as “corrupt,” arguing that Zimbabweans are now behaving like Nigerians who have to be corruptly paid for every service, according to the Telegraph.

SEE ALSO: From Slavery to Lumumba to Mandela, Pan Africanism Has Been Integral to Our Freedom

“Are we now like Nigeria where you have to reach your pocket to get anything done,” President Mugabe said. “You see we used to go to Nigeria, and every time we went there, we had to carry extra cash in our pockets to corruptly pay for everything. You get in to a plane in Nigeria and you sit there and the crew keeps dilly dallying without taking off as they wait for you to pay them to fly the plane.”

This is very interesting coming from the president of a country where corruption has polarized almost all political, private, and public sectors.

In fact, according to an Afrobarometer report released last year in Africa, Zimbabwe shared the top three spot with Nigeria and Egypt as Africa’s most-corrupt countries.

And recently, President Mugabe raised eyebrows when he spent £3 million on a lavish wedding for his eldest daughter, Bona. Although Zimbabwe is currently bankrupt and economists predict that the government will not be able to pay public servants in time — if at all — President Mugabe added insult to injury when he alluded to wanting a personal pay raise during his birthday luncheon.

As in most African countries, there is no system of checks and balances in place to hold leaders accountable: President Mugabe is able to take whatever he wants from the treasury for foreign visits and does not have to account for it.

Obviously, corruption is not unfamiliar to Africa. As a matter of fact, it is fair to say that the illegitimate practice has been accepted as an “African thing”; therefore, there is little effort from citizens to tackle it. The Mo Ibrahim Foundation, which was founded by billionaire businessman Dr. Mo Ibrahim, awards $5 million annually through the Ibrahim Prize to a head of state or leader in Africa who has demonstrated exemplary leadership and governance by minimizing corruption in his or her respective country.

It is troubling that for the past two years, the prize committee did not find a leader who is suitable for the award.

With the dawn of the 21st century seeing a shift in the dialogue on Africa’s potential and promise, the citizens of Africa must work hard to break this ruthless cycle of corruption and begin implementing processes and procedures to hold their leaders accountable. Egypt showed the world that it can be done through her revolution in 2011.

When Africans tackle corruption, Africa will have a lot to gain.