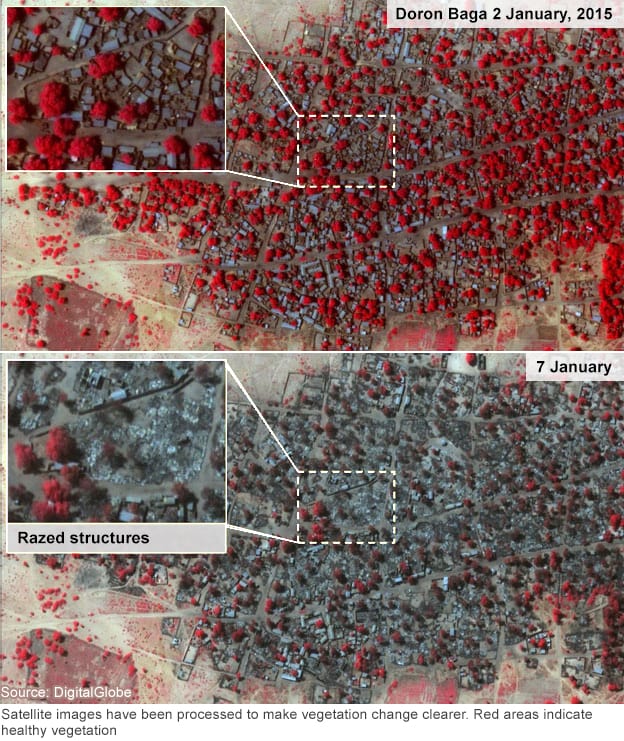 In the satellite image that was taken of Baga on January 2nd (pictured), lush vegetation is shown in red. There was also an abundance of fisherman boats that could be seen along the coast. 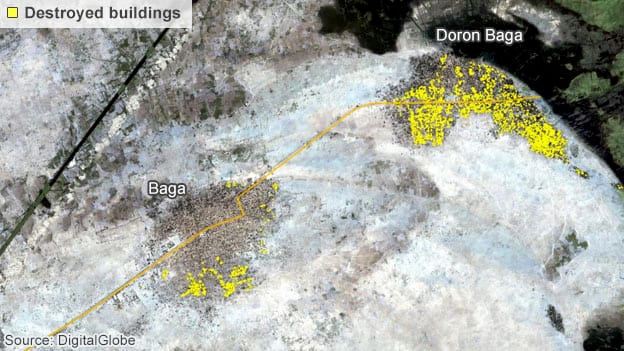 With the number of projected casualties coupled with the destruction to vegetation and buildings, Amnesty International is calling the assault waged on the people of Baga and Doron Baga “catastrophic.”

Amnesty Researcher Daniel Eyre added, “These detailed images show devastation of catastrophic proportions in two towns, one of which was almost wiped off the map in the space of four days.

“It represents a deliberate attack on civilians whose homes, clinics and schools are now burnt out ruins.”

Oddly enough, the Nigerian government has rejected the casualty numbers of Amnesty International, insisting that only 150 lives were lost in the reported massacre.

The BBC interviewed former UN Secretary-General Kofi Annan about the war being waged by Boko Haram, and he said that the Je Suis Charlie marches and demonstrations that were held in Europe over last week’s murder of Charlie Hebdo magazine employees and subsequent hostage-taking and siege indicated a level of unity and solidarity in Europe that Africa has failed to match, regarding Boko Haram.

Annan said, “The nature of that attack in Paris, caused lots of tension in Europe. Other cities were saying, “What next? Who is next?” So there was a strong sense of solidarity with everyone coming together to make their position known.

“What I wish is that we also on this continent, sometimes [we] will show the same solidarity and support of each other to begin with and then expect the international community to come in.

“They can come in and help, but they cannot solve the problems for us. We have to find our own ways of dealing with this, standing with each other, standing together to deal with some of these crises.”

Baga, which originally had a population of 10,000, is now said to be “virtually nonexistent,” according to senior government official of the area Musa Alhaji Bukar.

“It has been burnt down,” he said.

Nigerians Need To Look In the Mirror, If We Wish To Solve Boko Haram Problem