The images of the teens, who are between 16 and 17 years old, with their hands handcuffed behind their backs sparked outrage on social media, after an onlooker snapped several photos of the incident and posted it online.

According to the AtlantaBlackStar, critics saw the action of the officers who were in plainclothes as excessive and likely racially motivated.

U.S. Park Police Spokesperson Sgt. Anna Rose maintains the teens did not have the proper permits required to sell goods on the mall, adding that the three of them were placed in handcuffs “for the safety of the officers and the individuals.”

Park authorities added in a statement that the teenagers were let off with a warning about vending without a proper permit and released with no charges. 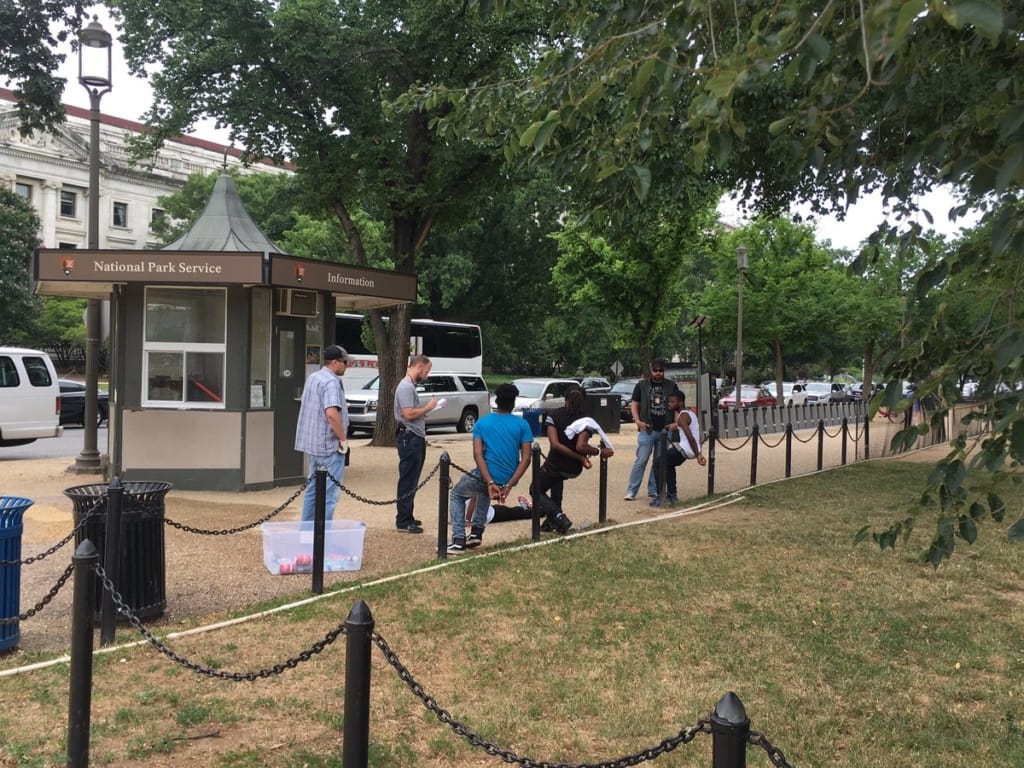 In a letter addressed to police authorities, Allen noted that the teens posed no risk:

I do not understand why the enforcement cannot take place with uniformed personnel and actions less severe than handcuffing individuals suspected of the sales.

I can’t help but think how the reaction by these same officers might have varied if different children had set up a quaint hand-painted lemonade stand in the same spot.

I observe any number of lemonade stands in these areas by neighborhood children. Should I warn the parents that their children are likely to be handcuffed and searched without the proper permits in hand?

Park authorities say the detainment was part of the police’s effort to crack down on illegal vendors, but many, such as Raymond Bell of the Helping Other People Excel (HOPE) project, argue that the youngsters — who are clearly aspiring to be entrepreneurs — should be encouraged instead of put in handcuffs like violent criminals.

Mr. Bell has offered to equip two of the teenagers with useful IT skills, including training them to become iPhone screen technicians.

“I’m an entrepreneur myself, and I love seeing young people having an interest in working for themselves,” Bell told WJLA.

“I know it’s not the sexiest thing,” Bell told the Washington Post, “But we need more positive images out there that are not just about rapping, singing, and playing ball. It bothers me that so many kids see that as the only path to success.”