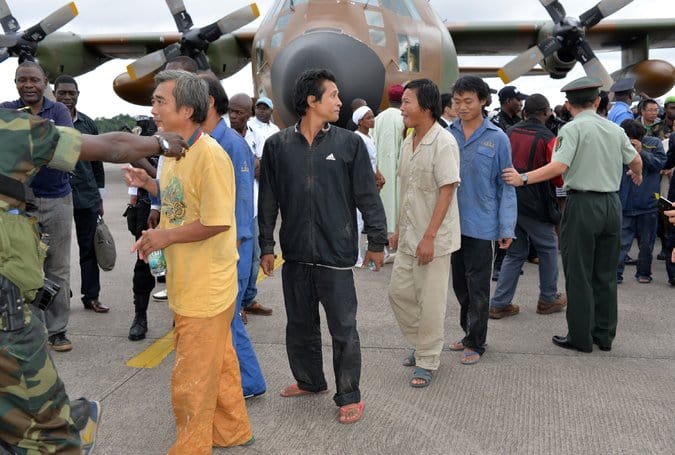 Cameroon (Face2Face Africa) On Friday, some 27 Cameroonians and Chinese hostages who were kidnapped by the Nigerian Islamic sect Boko Haram were set free, according to Cameroon Radio Television (CRTV).

The freed hostages included 10 Chinese road construction workers; 17 Cameroonians, including the wife of Cameroon’s Vice Prime Minister, Adamou Ali; a local Moslem cleric-mayor; and Lamido of the village of Kolofata, Sene Bouka; and his family members.

The liberated hostages were seized in the localities of Mora on May 16th and Kolofata on July 27th, which are both situated in the Far North Region of the Republic of Cameroon that share a common and porous border line with the Federal Republic of Nigeria.

After the hostages’ release, they were flown to the capital Yaoundé on board a military aircraft, accompanied by Cameroon’s Secretary General at the Presidency of the Republic Ferdinand Ngo Ngo who said there was a palpable anxiety and happiness among family members of the freed captives after long months of separation from their loved ones who were taken to an unknown destination.

“I am very happy to meet my family members, especially my Lamido and Mayor of Kolofata again,” Alhadji Aba, one of the liberated hostages said.

According to Cameroon’s Minister of Communication Issa Tchiroma Bakary, the hostages were released after very tactful negotiations that were championed by incumbent Head of State Paul Biya, “This is a testimony of the efficiency of the method used by the Head of State. While discouragement began to invade the minds and spirit of many people, we didn’t realize that on the ground the Head of State was doing what he used to do in such circumstances.

“Today, he has been successful and we are celebrating it. We are very proud of being Cameroonians, for having the Head of State at the helm of this nation, which is a strong testimony that at any given time, we can count on him.”

Two of the freed hostages, who collapsed shortly after they had arrived, were rushed to the hospital, including the rest of the group, for medical check-up.