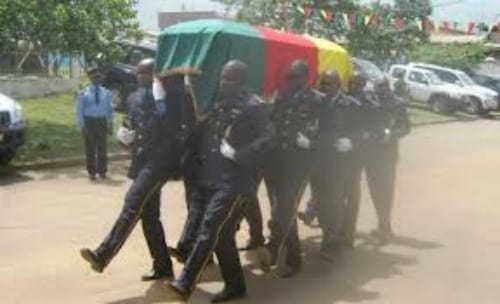 Yaoundé, Cameroon (Face2Face Africa) Some 27 soldiers of the West and Central African state of the Republic of Cameroon, who died in separate confrontations with the Nigerian Islamic Sect Boko Haram and Anti Balaka rebels of CAR, have been posthumously decorated with medals of valor.

The solemn and emotionally packed ceremony took place in the military headquarters in the capital Yaoundé, and never had the Yaoundé military headquarters witnessed such an overwhelming and mammoth crowd, which had in attendance top-ranking military officials, Ministers, and the family members of the 27 fallen Cameroonian soldiers.

According to the Minister of Defense, Edgar Alain Mbengo’o, who chaired the coffin ceremony,  ‘‘The fallen soldiers are true Patriots, and Cameroonian soldiers are out to avenge the death of their Comrades.”

Twenty six of the gendarmerie and military forces who constituted a special contingent mission titled ‘’Operation Emergence 3,” fell on the battle field following heavy gun battles with Boko Haram rebels on July 24th, 25th, and 26th in the towns of Kolofata, Ngage, Ngamon, and Balgaram – all border towns found in the Far North Region of Cameroon that shares a very long and porous borderline with Nigeria.

Still, one other Cameroonian soldier was also killed. He was a part of MISCA forces in CAR who died following confrontations with Anti-Balaka rebels in the Capital of Bangui on August 7th.

The towns of Gashigasha , situated still in the Far North, has been taken over by Cameroonian military forces after it felt under Boko Haram control, the Minister told the press during the solemn occasion. “I am pleased to announce to you that the town of Gashigasha that was formerly controlled by Boko Haram rebels has been retaken and now controlled by the Cameroonian military forces.”