Archbishop Dieudonne Nzapalainga of the Central African Republic (CAR) has made history, after becoming the first cardinal from the war-torn country to be elevated to the College of Cardinals by Pope Francis. The 49-year-old is also the youngest of the college’s 229 members. According to CNN, the average age of cardinals is 83.

In addition to Nzapalainga, Bishop Emeritus Sebastian Koto Khoarai from Mohale’s Hoek in Lesotho and Bishop and Maurice Piat, of the Roman Catholic Diocese of Port-Louis in Mauritius, were among 17 additional global priests who were all appointed to the College of Cardinals.

Key roles of the cardinals include electing the pope and acting as his advisers and collaborators. Cardinals are eligible to vote until they turn 80.

According to the New York Times, there are currently 121 cardinals who are eligible to vote for the next pope, and collectively they are known as the “Princes of the Catholic Church.”

Following his selections, Pope Francis called for forgiveness and reconciliation after acknowledging that in a diverse world, “polarization and animosity, including among priests, are global problems.”

During a ceremony at St. Peter’s Basilica in which he ordained the 17 new cardinals, the Pope added:

We see, for example, how quickly those among us with the status of a stranger, an immigrant, or a refugee, become a threat, [or] take on the status of an enemy. An enemy because they come from a distant country or have different customs. An enemy because of the color of their skin, their language, or their social class. An enemy because they think differently or even have a different faith. And, without our realizing it, this way of thinking becomes part of the way we live and act. Everything and everyone then begins to savor off of animosity. Little by little, our differences turn into symptoms of hostility, threats, and violence.

In emphasizing that diversity should be embraced rather than shunned, Francis appointed cardinals from all over the world, including Africa, Asia, Europe, Latin America, the Middle East, and the United States. 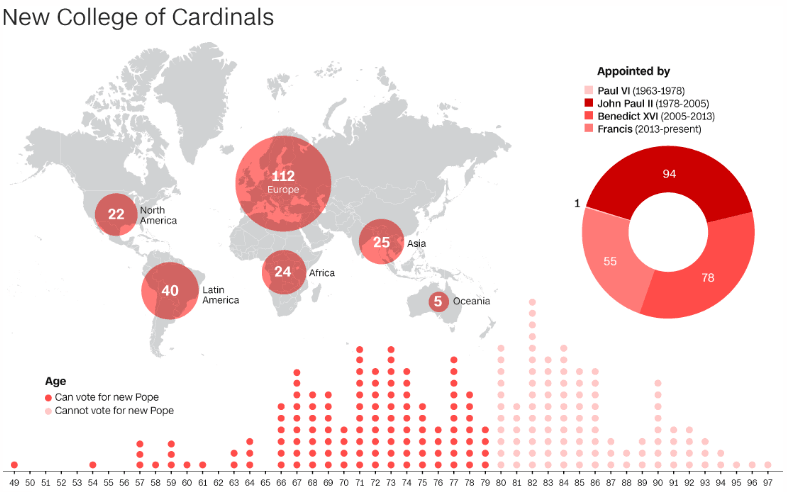 Europe continues to dominate geographically and the College of Cardinals and the average age remains high. Photo Credit: CNN

Since 2013, the country has been rocked by chaos, following the coup d’etat of then-Christian President François Bozizé by Muslim militia group Séléka. Christian militias retaliated, increasing tensions between the two religious groups. The positive efforts of Nzapalainga and Layama in helping CAR transition into a democracy has caught the attention of the international community, including the Roman Catholic Church.