The photos, which are currently making the rounds on several media platforms, show Rwigara completely naked while striking poses in different positions inside a house. The images of the 35-year-old businesswoman reportedly appeared on Friday, after they were leaked by unknown persons, according to NairobiNews. 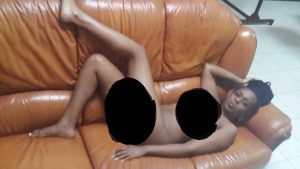 The leaked photos are coming on the heels of an earlier announcement by the trained accountant-turned-politician that she would be challenging Rwandan leader Paul Kagame as an independent candidate at the presidential elections scheduled in August.

Announcing her candidacy on May 3, Rwigara promised to open up the political space, champion free speech, and revisit the issue of term limits for elected political office holders, including the president.

In her address to a cross section of journalists, she criticized the atmosphere of fear and victimization that pervades the Rwandan opposition and took a direct swipe at President Kagame who has held office for more than two decades, with new legislation recently passed to ensure he continues in power for at least another decade.

“When time comes for leaders to leave power, they get excuses to stay and then say that it is the people who are asking them to continue to lead. This is a bad habit across the continent,” Kwigara said.

Rights groups have repeatedly accused the Rwandan government of several abuses, including forced disappearances, arbitrary arrests of opponents, and murder. They have also condemned what they describe as President Kagame’s increasing stranglehold on political power in Rwanda.

It is unknown what person or group leaked the nude photos of Rwigara in a move that was clearly meant to embarrass the young female politician.

It is also unclear to what extent the leaked photos will affect Rwigara’s chances at the polls in a conservative society like Rwanda, but some young commenters on social media have said they see nothing wrong with the unclad aspirant that were obviously taken in her private time.