Wizkid, who has been updating his social media on his progress with his new album, took to Twitter again to share the good news with his fans:

Wizkid impressed the controversial Brown who performed in Nigeria during the leg of his Carpe Diem worldwide tour in 2012.

Chris who was fresh from performing in South Africa featured Wizkid as a surprise act during his Nigerian performance. Both acts took the stage where Wiz taught Chris some Azonto moves.


Hours later, Chris tweeted a photo on his Instagram page of a YouTube snapshot of Wizkid’s “Dance For Me” video. 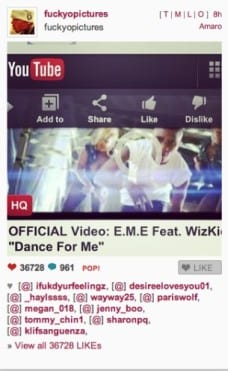 It was captioned, “Hardest song out right now!!!! I f**k wit this shit tuff! @wizkidayo.”