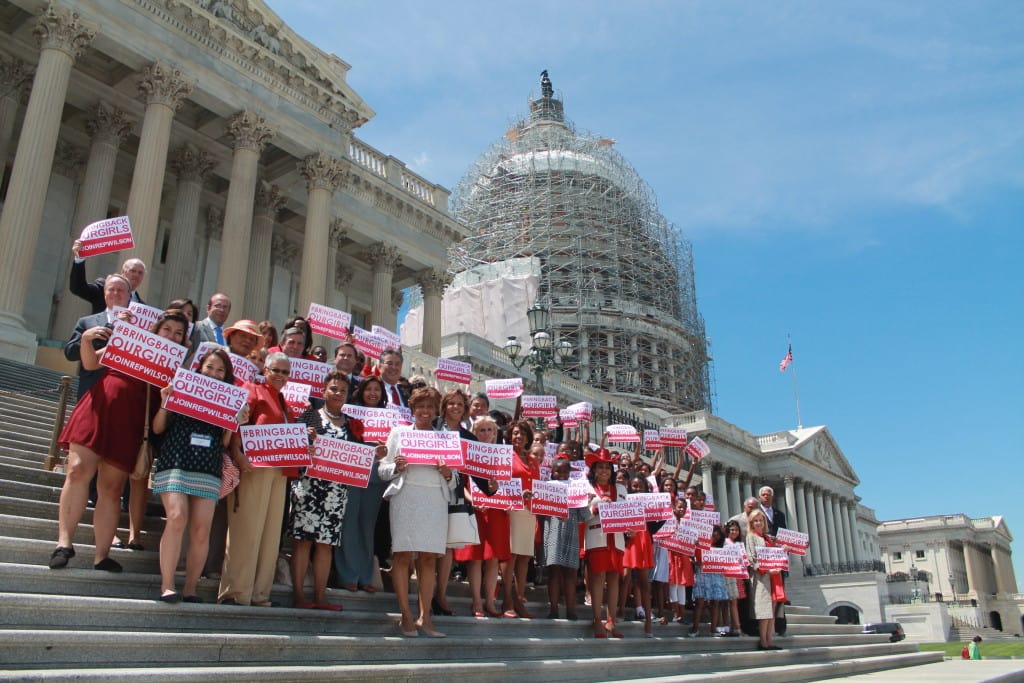 One year and 73 days have passed since members of the Nigerian terrorist group Boko Haram kidnapped nearly 300 girls from their dormitory rooms. Since then, Congresswoman Frederica S. Wilson (FL-24, pictured below in red) has waged a relentless campaign for their return, which includes “Wear Something Red Wednesday“ and #BringBackOurGirls that she leads weekly with Democratic Leader Nancy Pelosi (CA-12), Republican Conference Chair Cathy McMorris Rodgers (WA-5), Congresswoman Carolyn B. Maloney (NY-12), and Congresswoman Ileana Ros-Lehtinen (FL-27).

participated in the event as part of their advocacy training at a week-long Camp Congress for Girls, an innovative program that introduces them to politics and everything one needs to know about running for and serving in Congress. When they return to their hometowns, the diverse group of girls will take what they’ve learned on Capitol Hill and at camp to raise awareness in their communities and classrooms about the kidnapped girls and Boko Haram and to build support for its victims.

For Rep. Wilson, a former educator and the founder of the 5,000 Role Models of Excellence Project that helps at-risk boys grow up to become productive young men, the concept of losing one’s freedom, or worse one’s life, as retribution for pursuing an education, is unconscionable.

The Wear Something Red Wednesday campaign aims, in part, to ensure that the world does not forget the girls who are still missing.

The Florida lawmaker’s tenacious commitment to this cause has not gone unnoticed and for some it has become both an inspiration and an aspiration.

“A lot of people learned about the abduction and said, ‘That is so sad; let’s go to Starbucks.’ Then they forgot about it and when they realized the girls are still missing, they said, ‘Oh my gosh, this is still going on?’ and then just went to the pool,” said Isabel Viner, 15, of Reston, Virginia. “Rep. Wilson has been on this since it started and she’s not going to settle until it’s over. I think that is so important.”

Sidney Boyd, 17, said that the Bring Back Our Girls campaign has led her to appreciate all of the opportunities available to her, particularly the freedom to learn and become whomever she chooses to be, a sentiment echoed by many of the girls. The Fort Lauderdale native recalled how in the past year while sitting in chemistry class she sometimes would remember that “there are girls who literally don’t have the ability do what I’m doing; they’re not allowed to go to school.”

Sidney added that she plans to initiate a Wear Something Red day at her school this fall.

Alex Abibi, 14, from Vienna, Virginia, agreed that raising awareness is critical and believes that in doing so, she and other young people can really make a difference.

“The purpose of being an advocate is to make a change, to make a difference. Whenever you encounter a wrong, if you fight and stand up against it, you can make it right. You don’t have to be an elected official; you can be an ordinary citizen who is concerned about the betterment of mankind,” Rep. Wilson told the girls.

“If an ordinary citizen who is concerned is able to detect injustices or issues and laws that need to be changed, they can make a difference just by advocating on their own, just like you.” 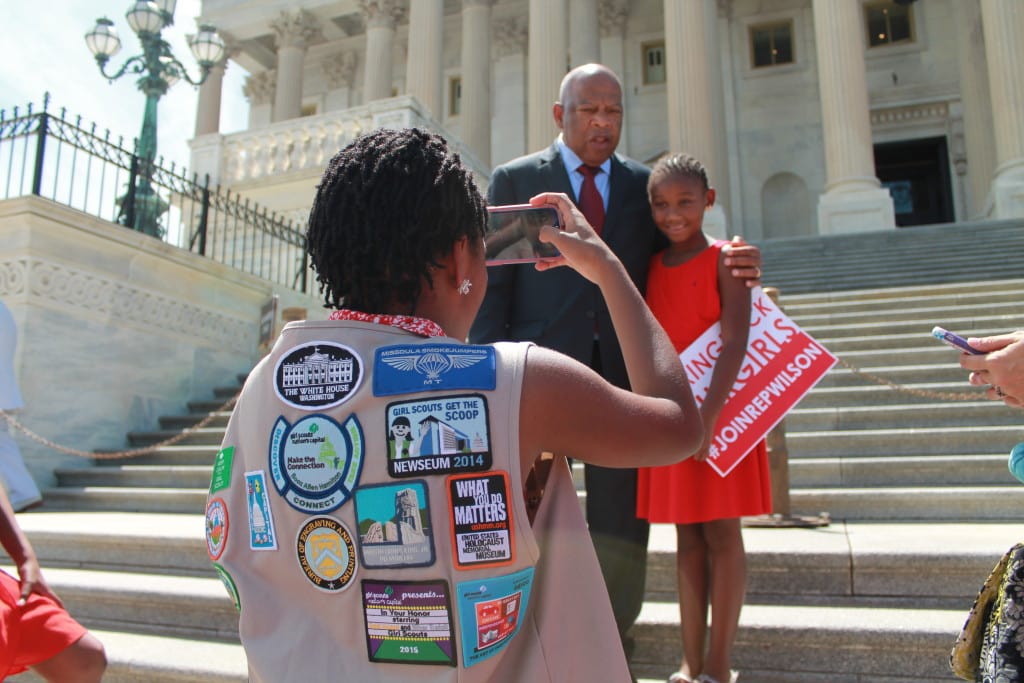 Rep. John Lewis (pictured beside young girl) of Georgia, a Civil Rights Movement icon, reminded the girls of the power of social media in advocacy.

“If you see something that is not right, not just, not fair, speak up. You are never too young or too old to speak up. Find a way to do something, to say something,” he said. “We didn’t have social media or have access to the Internet or Facebook. You can communicate with your friends, classmates, and others [using social media] to get things done.”

Congresswoman Frederica S. Wilson is a third-term Congresswoman from Florida representing parts of Northern Miami-Dade and Southeast Broward counties. A former state legislator and school principal, she is the founder of the 5000 Role Models for Excellence Project, a mentoring program for young males at risk of dropping out of school. Congresswoman Wilson also founded the Florida Ports Caucus, a bipartisan taskforce that coordinates federal action in support of Florida’s harbors and waterways.

SEE ALSO: The Youth Need To Take Up African Feminism