Twenty-nine years after a massive wave of protests challenged the legitimacy of South Africa’s white-only elections, a fresh wave of protests has left 19 government school buildings in ruins.

The latest protests began on Sunday in Vuwani, a town in the rural province of Limpopo after “after residents failed in a legal bid to stop their area from being shifted from the authority of one municipality to another,” Associated Press reports.

Over the course of the week, more than 20 schools were burned across a total of three towns, leaving two totally destroyed and another 19 significantly damaged as of Thursday evening. Protesters also targeted a police station, post office and traditional chief’s office, says police spokesman Malesela Ledwaba.

The issue at hand is the community’s failed bid to stop their area from being reassigned to another municipality. Some local media reports that students in the affected towns fear the reassignment will hurt their prospects for higher education while others worry that the y will lose eligibility for some government grants. The redistricting move takes place several months ahead of the August 3 local government elections. Some have vowed to keep protesting up to that very date.

South Africa’s president Jacob Zuma decried the destruction as expected; social media commenters were more mixed in their reactions, however, universally condemning the actions while offering sympathy at times for the protesters’ cause.

While the grievances relating to re-demarcation are legitimate, this is not an acceptable reason to destroy. – @MmusiMaimane #Vuwani

By contrast to this week’s events, today marks the 29th anniversary of a massive anti-apartheid protest when some 500,000 blacks in Johannesburg boycotted from their jobs and took to the streets in a two-day “stayaway” protest against the white-only elections.

“The two-day ‘black stayaway’ … began peacefully except in black townships near Durban, according to the government Bureau for Information. There, police were reported to have battled stone-throwing crowds with tear gas and birdshot.

“Authorities reported five explosions, including a land mine that killed a truck driver and two noisy but nonlethal blasts overnight in downtown Johannesburg.” 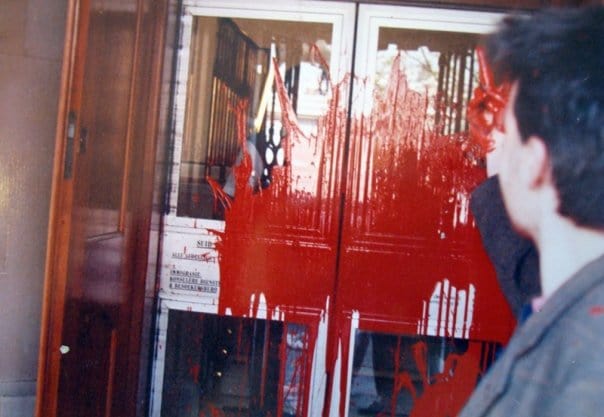 The South African embassy at London during the May 1987 anti-apartheid protests. (Photo: nonstopagainstapartheid)