Four days after a six-story residential building collapsed in Huruma Estate, Kenya, a six-month-old baby girl has been rescued alive from the rubble.

The seemingly jovial but emaciated infant, Dealeryn Saisi Wasike, was found in a basket wrapped in a blanket under the heavy concrete debris. Her miraculous rescue brought a beam of hope to the grim site where, so far, 23 bodies have been retrieved.

Whereas rescue efforts have been slow and delicate, the sign of life has given rescuers renewed energy to hasten the process with hopes of retrieving more survivors. Relatives of the 95 missing persons are hopeful that their loved ones also will be rescued alive.

The residential building caved in on Friday at around 9 pm with tenants inside, following a heavy downpour that has left a trail of destruction across the country. Locals alongside officers from the National Youth Service rushed to the scene and managed to rescue over 100 people. 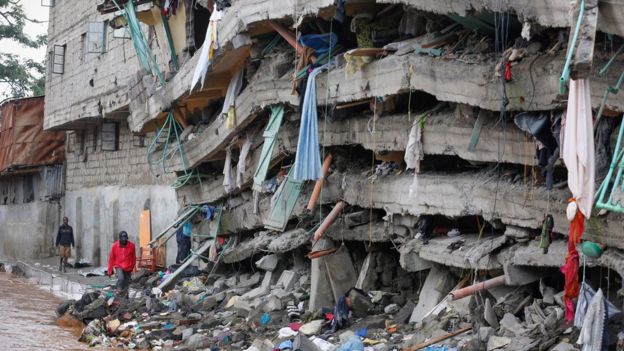 Many are said to still be trapped beneath the rubble five days after the incident.

Not a Single Bruise

Disaster Management Unit officials said the six-month-old baby had no bruises or any sign of harm despite the heavy debris of concrete, broken metal and house hold items that had been lying above her for four days.

“She had no bruises. No mark that she was hurt and she did not even cry,” said Pius Masai of the Disaster Management Unit.

The little ‘angel’ had conquered dust, limited air, cold dirty running water from the adjacent Nairobi River, and a four-day fast. Baby Wasike was rushed to Kenyatta National Hospital where she examined and declared out of danger.

Ralson Wasike, the father of the six-month-old baby Wasike, said he was woken up by a call from her sister who informed him of the discovery of a baby from the collapsed building. He immediately rushed to the scene to see if the baby was his daughter. 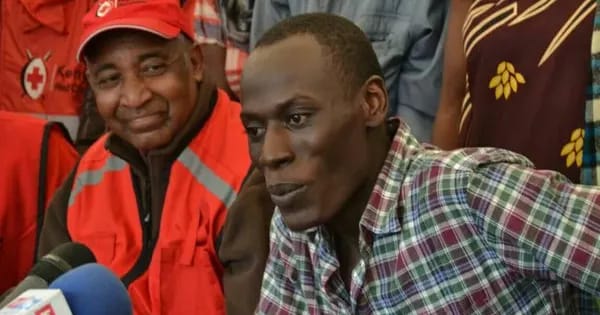 Mr. Ralson Wasike the father of the six-month-old baby that was rescued from the collapsed building. (Photo: www.tuko.co.ke)

Although still weighed down by the news of his wife’s death, Mr. Ralson could afford a smile as he narrated to the press how he dreamt of his daughter being alive.

“I had a dream that I was combing my girl’s hair. She had this beautiful long hair,” he said.

As he entered the hospital ward where the baby was lying, Wasike said he immediately recognized her as his only daughter.

“I called out ‘mum’. She raised her hands like she wanted me to carry her. I cannot explain how much joy I felt. Crying would have not been the best way to express the emotions,” Mr. Wasike said.

As the rescue enters its fifth day, relatives of the missing victims lament the slow rescue and recovery process. However, the rescue team has asked everyone to be patient, saying the slow rescue efforts are aimed at ensuring no further damage is done to the victims who may be alive or to the bodies of the deceased.