Al Jazeera reports that at least two people have been killed and many other injured in the violent protests that have hit Libreville.

Official results released on Wednesday by Interior Minister Pacome Moubelet Boubeya reveal that President Bongo had been re-elected with 49.80 percent of the vote, narrowly beating main opposition leader Jean Ping who garnered 48.23 percent of the vote.

The AFP reports that anti-government protesters stormed the office of the electoral commission and tried to gain entrance immediately after results of the controversial election were announced.

On Tuesday, angry demonstrators stormed the country’s parliament and set it ablaze. There have also been reports of shop looting and multiple cases of arson in many neighborhoods around Libreville.

Not surprisingly, President Bongo’s supporters are defending the election results, with a spokesman for Bongo’s campaign, Alain-Claude Bilie-By-Nze, describing the election as “free, democratic, and transparent,”according to the AP news agency.

In a press statement, President Bongo called for what he considered “respect for the verdict of the ballot box.” 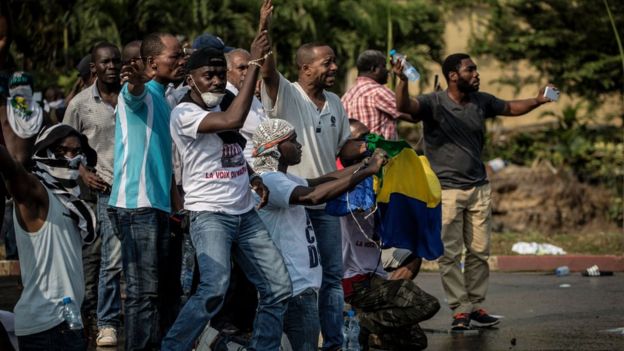 In August, Ping was chosen as a consensus candidate by a coalition of Gabon’s major opposition parties to provide a serious challenge to halt the Bongo family’s 50-year grip on power.

Ping, 74, is widely considered as one of Africa’s foremost diplomats; he is a former African Union chairperson and a one-time Foreign Minister of Gabon.

The opposition says that two people were killed, when security forces attacked the opposition party headquarters.  Speaking to news men about the incident Ping said, “They attacked around 1:00 a.m. (0000 GMT). It is the Republican Guard. They were bombarding with helicopters, and then they attacked on the ground. There are 19 people injured, some of them very seriously.”

The United States, France, and the EU have all called for calm and restraint from supporters on both sides, with UN Secretary-General Ban Ki-moon imploring all parties involved “to refrain from further acts that could undermine the peace and stability of the country.”

Bongo was elected president of Gabon in 2009 in a controversial election just months after the death of his father and long-time ruler Omar Bongo. Together, Ali and Omar have ruled the oil-rich country for a combined 49 years.