The Nigerian navy’s newest warship, the NNS Unity, is sailing toward the Gambia ahead of possible military intervention needed over incumbent President Yahya Jammeh‘s refusal to accept election defeat and step down when his term expires on Thursday, according to the BBC.

The initial aim is to put on a show of force rather than to launch an attack, a military source said. The 1,800 ton, 95 meter Chinese-built vessel is sailing toward the Gambia after departing from Lagos, Nigeria’s commercial capital.

In December, Ecowas Commission Chairman Marcel Alain de Souza declared that troops from Senegal are prepared to lead a regional intervention force to remove Jammeh from office if he decides to hold on to power.

“The deadline is Jan. 19th, when the mandate of Jammeh ends,” de Souza said, adding, “If he is not going, we have stand-by forces already alerted and these stand-by forces have to be able to intervene to restore the people’s wish.”

Senegal, which borders Gambia on three sides, has also confirmed its readiness of ground troops ahead of Thursday’s deadline. 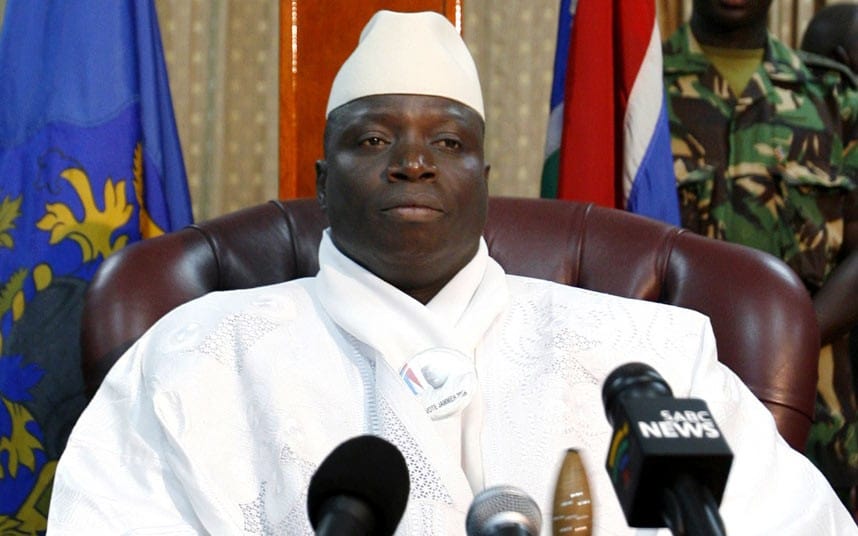 The nigerian navy ship is expected to put on a show of force rather than to launch an attack.
Photo Credit: Gainako

With less than 2 million people, the Gambia is one of the smallest countries in Africa, and military strategists say its small army can hardly be expected to stand up to a regional force in the event of combat.

There have been repeated attempts by West African heads of government, including Liberian President Ellen Johnson-Sirleaf and Nigerian President Muhammadu Buhari, to press Jammeh to accept the election result and respect the will of the Gambian people.

However, President Jammeh has refused.

Still, Ecowas maintains that it does “not wish to start a conflict.” In fact, they expect Jammeh to calmly negotiate an exit door in the interest of peace and unity of his country.

In a desperate counter move on Tuesday, Jammeh declared a nationwide state of emergency, alleging that several foreign interests had been invested in last December’s election results.

In an address delivered on state television, Jammeh said the declaration was “due to the unprecedented and extraordinary amount of foreign inference in the December presidential elections and also in the internal affairs of the Gambia.”

He then added that the situation had created an “unwarranted hostile atmosphere, threatening the sovereignty, peace, security, and stability of the country.”

The Gambian constitution allows for a state of emergency for a maximum seven-day period if unilaterally declared by the President and a maximum 90-day period if confirmed by the national assembly.