Asians in Kenya are seeking for official recognition as one of the country’s ethnic groups, asking the government to acknowledge their community as the country’s 44th ethnic group, with rights and benefits as ordinary Kenyan citizens.

According to a report in The Nation, the community called on President Uhuru Kenyatta to do for them, what he did to the Makonde in Kwale who were recently recognised as the country’s 43rd ethnic group after they complained of decades of marginalisation.

While delivering an address at an event last week, the executive director of the Mother’s Lap Foundation Farah Mannzoor said the Asian community believed they deserved the recognition because according to them, “we have exercised our duty as citizens.”

“Asians came here in the 1820s as merchants and masons. Later in the 1890s, they played an important role in the construction of the Uganda railway.

“The railway opened up the interior of Kenya and wherever it passed, trading centres sprang up. From that time, Kenya continues to enjoy trade with neighbouring Uganda and other countries,” Mannzoor said.

She emphasised the positive role the east African community had played in the growth and development of modern Kenya.

“Our diversity and sense of togetherness in good and bad times have clearly reflected our steady socio-economic development, not just in East and Central Africa but in the rest of the continent,” she added.

A sizeable Asian population exists in Kenya and much of east Africa. Indian migration to modern day Kenya began with the construction of the Uganda railway by the British between 1896 and 1901. Some 32,000 indentured labourers were recruited from Britain’s colony in India. 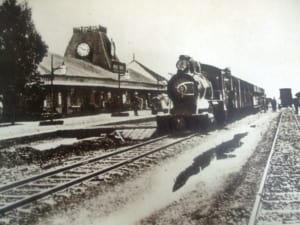 Asians played an important role in the construction of the Uganda Railway.
Photo Credit: theeagora

On completion of the railway, many of these labourers voluntarily settled in what was then the East Africa Protectorate and brought over family from India. Most of the new immigrants settled in the new town of Nairobi, which had been the capital of the British protectorate since 1905.

Unlike black Africans, the British permitted the Asians to reside in Nairobi which was then a mostly white-only town.

After the Second World War, Asians could be found in nearly all occupations in Nairobi and surrounding townships. Their business acumen ensured that they continued to thrive within Kenya and the rest of East Africa.

By the late 1950’s, the Asian community had established a solid foothold in the Kenyan economy. They accounted for barely 2 percent of the overall population, but their businesses dominated the markets of Nairobi.

When Kenya achieved independence from Britain in 1963, relations between Kenyans and the Asian community quickly deteriorated. The Asians were given two years to acquire a Kenyan citizenship and forsake their British passport, however, only few complied with the ultimatum, leading to more hostility and distrust from African community.

Those without Kenyan citizenship soon found themselves subject to increasing discrimination by the ruling government. In addition, a policy of ‘Africanisation’ meant many of them were sacked in favour of black Africans in the civil service.

Faced with increasing uncertainty, a significant number of the Asian community in Kenya and east Africa fled the region in the 1960’s and 1970’s and re-settled in the United Kingdom, thanks to their British passport.

In succeeding years, there has been a significant improvement in the legal and constitutional status of the remaining members of the Asian community, however despite broad efforts at assimilation and integration, most members of the community have retained their strong ties to India and continue to exist in Kenya as a close-knit community.

In 2009, Kenyan Census figures put the number of Kenyan citizens of Asian origin at 46,782, with another 35,009 Asians without Kenyan citizenship living in the country.

Have your say. Do you believe that they should be granted their wish to be recognized as a legitimate ethnic group in Kenya? Comment below!