With more than 200 cars from the office of Ghana’s president missing after the exit of former President John Mahama, new President Nana Akufo-Addo has reportedly been forced to travel in his personal car.

President Akufo-Addo has reportedly one official car at his disposal: a 10-year-old BMW. Since the “disappearance” of hundreds of state cars from the presidential car pool, he has had to travel in his private car on trips outside the Greater Accra Region, reports Citifmonline.

In a press conference on Wednesday, Presidential spokesman Eugene Arhin told reporters that the new government, which was sworn in only last month, met a severely depleted presidential motorcade.

“The President of the Republic currently has virtually only one vehicle at his disposal. This is the vehicle, which was purchased in 2007 during the Ghana at 50 celebrations. It is a BMW,” Arhin said. 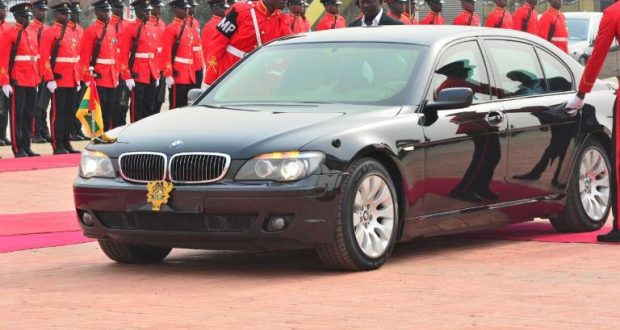 Arhin went on to imply that officials from the previous administration had made away with several cars from the presidency or had failed to return the ones in their possession.

“He [The President] unfortunately has to use his own vehicles because the vehicle meant for the presidency or vehicles meant for his use are currently not available,” Arhin continued.

Arhin also expressed surprise that most of the official vehicles bought to commemorate Ghana’s 50th independence anniversary in 2007 were missing or unaccounted for.

“So vehicles right from 2007 when these Ghana at 50 vehicles were bought right down to now, if you go to the presidential pool, you cannot find any of them and it is not as if those are the only ones. There are lots of other vehicles,” he said.

In all, he said about 218 cars were missing from Ghana’s state house and the Flagstaff House and gave a breakdown of the missing vehicles to include 122 Toyota Land Cruisers, 53 Toyota Prados, 13 Mercedes, 26 Toyota Avalons, and 4 BMWs.

In previous transfers of power in Ghana, the new government had to seize state-owned cars from officials who did not return them.

In October, Ghana’s parliament passed a law requiring all outgoing ministers and government officials to vacate their official residence and hand over all state properties in their possession within three months after the swearing in of a new government or face forceful eviction.

Only last month, former President John Mahama made the news with reports of his apparent refusal to vacate the official residence, where he has been living since he became president.

Johnny Osei Kofi, a spokesman for former President Mahama’s National Democratic Congress party, refuted the claims, though, saying the last administration left behind two pairs of relatively new bullet proof cars for the use of the new president.

He added that President Akufo-Addo’s decision to travel around in his personal car was a matter of choice.