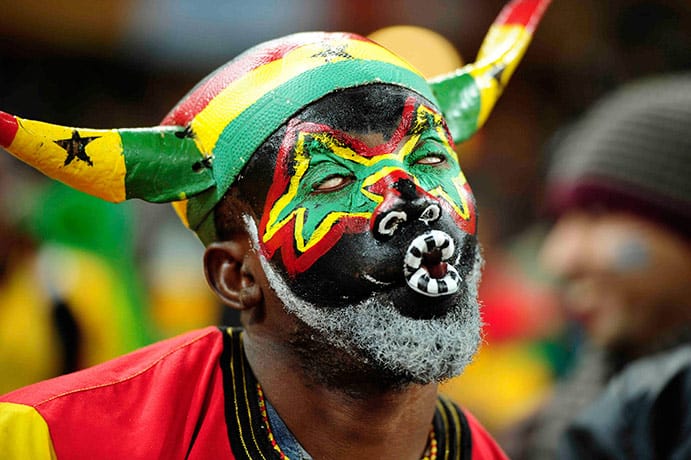 “Wisdom cannot be imparted. Wisdom that a wise man attempts to impart always sounds like foolishness to someone else. … Knowledge can be communicated, but not wisdom. One can find it, live it, do wonders through it, but one cannot communicate and teach it.”  ― Hermann Hess

“Change does not roll in on the wheels of inevitability, but comes through continuous struggle. And so we must straighten our backs and work for our freedom. A man can’t ride you unless your back is bent.” ― Martin Luther King Jr.

Ghana, a country currently led by NINCOMPOOPS…. I type this without remorse. We deserve to be colonized until the end of time. We don’t deserve to be a republic or an independent state. We are clueless as a nation in managing our resources.

Too many derelict leaders. My heart bleeds. We have screwed-up priorities.

Ghana is a soccer-loving nation and so the World Cup is always a huge party every Ghanaian is invited to. There aren’t any gate crashers because invitations are extended to all. It’s a time every Ghanaian forgets about politics, poverty, and a plethora of other problems. The populace embraces the World Cup and the success of the Ghana national team, the Black Stars, which creates a frenzy, euphoric atmosphere within the motherland.

The Ghana FA/World Cup Committee for Brazil 2014 decided to have 15 Ghanaian “CELEBRITIES” at the World Cup in the name of boosting the morale of the players. This group consists of actors, musicians and veteran sports icons. Usually, this would be welcoming news, but don’t get too excited just yet.

Each ambassador will be handed $20,000 (twenty thousand dollars) as per diem plus FREE accommodation in Brazil. Now let’s do the math:

Currently in Ghana, the electricity situation is appalling: The nation has been rationing electricity for God knows how long. Many sleep in the dark and small business owners are struggling. We do not even have a national bird we can boast of. Polytechnic teachers have not been paid salaries for months and months. Nurses and doctors recently got paid their wages after months of being on strike. Our hospitals are in deplorable states. In addition, we are investing less and less toward child education and youth development.

Why we’ve decided to spend $300,000 on so called celebrities beats my mind.

In addition to these celebs, 100 “supporters,” including CHIEFS, will accompany the Black Stars to Brazil.

These supporters will be cheering for the footballers on… wait for it…BIG FLAT-SCREEN TVS, according to the “honorable” minister Afriyie Ankrah due to the shortage of tickets.

How is this not nonsensical? I don’t see the United States, United Kingdom, Russia, China, France, Italy, or any of the other competing countries emulating this foolishness.

I understand the Ghana Football Association and Sports Ministry led by Kwasi Nyantakyi and Elvis Afriyie Ankrah have a 24.6 million Ghana cedis budget for the World Cup. This budget covers eight World Cup qualifiers as well.

According to the public relations officer of the Electricity Company of Ghana, William Boateng, at LEAST 500 million Ghana cedis would be needed annually for the next five years in order to enable a stable and uninterrupted power supply.

This is obviously not a priority for Ghanaian leaders because they can afford plants and generators in the comfort of their homes courtesy of the tax payers money.

You see, our problems are very well documented as a nation and as a people. We just choose not to do anything about them. There are three popular sayings:

“Cut your coat according to your size.”

“Don’t bite off more than you can chew.”

“Learn to live within your means.”

As a nation and continent, we are constantly living beyond our means and shoving down our throats more than we can chew. Unfortunately, due to the lack of a proper “balanced diet,” we are a bunch of malnourished individuals gallivanting in baggy onesies.

It is my prayer that Ghana returns home after the group stages because the longer we stay in the tournament, the higher the risk in the embezzlement of funds and thievery by the sports ministry and football association.

Meanwhile, the Electricity Company of Ghana needs 500 million Ghana cedis annually to curb the nation’s electricity crises. Also, the government is currently soliciting for $303 million from potential partners to fund Ghana’s Rail Rehabilitation Project, which will cover the existing western, eastern, and central rail lines. These lines are all linked to the Takoradi & Tema ports. The rehabilitation of these rail lines will boost the transportation of farm products and minerals.

Unfortunately, our inept leaders are too ignorant to see this as priority. Many projects can be funded by our government if we managed our natural resources well. These concerns aren’t prevalent in Ghana alone. Unfortunately, this cuts across the continent.

As an expat and a concerned citizen, it hurts to call Ghana my home. For now all I can do is vent and highlight these malpractices. I’m determined to relocate to Ghana soon. Many think it’s a bad idea considering the hardships and current state of the economy, but I’m not deterred.

You lose every right to complain about anything if you aren’t contributing in any way toward change.

You see, I don’t just want to live, but I need to live for something. My name has to become synonymous to positive change. I can choose to remain here in my little corner in this United States of America and continue slaving while at the same time minding my own business, but I believe in my heart of hearts that isn’t my calling. I feel obligated to leave this world better than I met it. If for nothing at all, a much better Ghana/Africa for my kids.

I have a dream that one day, my kids and their grand kids would rather prefer to slave in Ghana/Africa than overseas.

You don’t need to be a politician to bring about change. You can live an exemplary lifestyle and be an advocate for change without having the title of a president. You might not be a janitor, but you can do the job of a janitor without the title. You won’t appreciate the joy in being served if you haven’t served yourself. Giving and being selfless will mean a lot to you if you know how it feels not to have anything.

I am not a preacher man. I’m just a wounded Ghanaian/African bleeding from the heart and hoping for a better continent.

“Human progress is neither automatic nor inevitable… Every step towards the goal of justice requires sacrifice, suffering and struggle; the tireless exertions and passionate concern of dedicated individuals.” – Martin Luther King Jr.