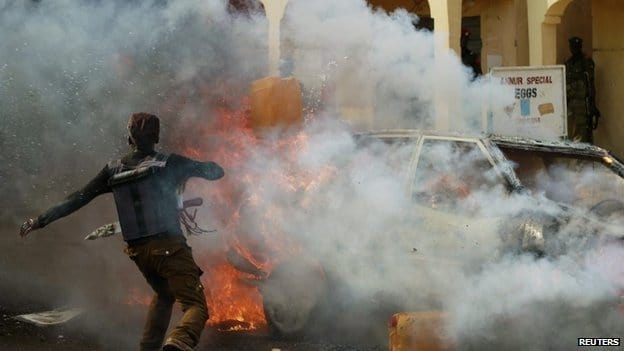 After Nigerian President Goodluck Jonathan (pictured below) completed his speech in Gombe, a female suicide bomber detonated a bomb, killing one and wounding 18, reports the BBC. 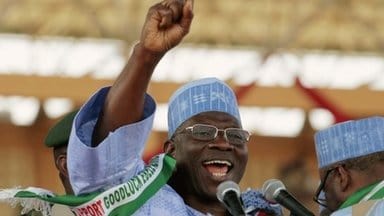 On Monday, minutes after President Jonathan delivered his re-election speech at a rally in the northeastern city, a female suicide bomber reportedly detonated a bomb near a car, killing a female passerby.

Rally attendee Mohammed Bolari describes the explosion, “The President had just passed the parking lot and we were trailing behind his convoy when the explosion happened.”

The brazen assault prompted youth to begin attacking People’s Democratic Party supporters, President Jonathan’s political party, with an unnamed journalist telling the BBC, “They were shouting and denouncing the President’s visit which they blamed for the attack.”

The youth are likely frustrated with the President because — in addition to Monday’s attack — on Sunday, the city was met with two blasts that killed five people. 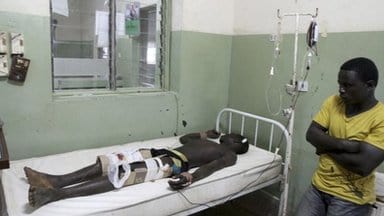 Also on Sunday, the capital of Borno state, Maiduguri, was attacked for the second time in a week. Maiduguri, which has become the safe haven for civilians looking for safety after their respective towns and cities have been attacked, is also home to Borno state’s officials and dignitaries.

The populous city would become the crown jewel of Boko Haram’s ever-increasing caliphate if they were able to overtake it.

The seemingly indefatigable terrorist group has been eyeing the city for some time now.

Last September, Boko Haram unleashed panic when they ominously surrounded the city but did not attack.

However, last week, they finally attacked but were met with stiff resistance, failing to penetrate the city.

Sunday’s attack brought the same results but an even higher death toll for the sect.

Defence Ministry spokesman Chris Olukolade is quoted as saying the attack was “contained” and the rebels suffered heavy casualties.

The militants attacked in the early hours of Sunday, and gunfire was reported on the streets of the city.

Brig Gen Olukolade was quoted by the AFP news agency as saying that “the terrorists incurred massive casualties” on Sunday.

“The situation is calm as the mopping up operation in the affected area is ongoing,” he added.

In order to permanently silence Boko Haram, the African Union agreed to create a task force of 7,500 troops from the countries of Cameroon, Chad, Benin and Niger last Friday.