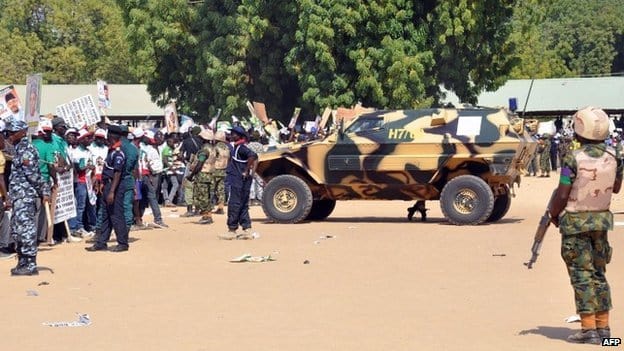 After seemingly casing the capital of Borno state for months, Islamic militant group Boko Haram attempted to take over Maiduguri over the weekend, after taking over yet another territory, Monguno, hours earlier nearby, reports the BBC.

As the capital, Maiduguri plays a central role in Borno state in addition to serving as a safe haven for civilians who have lost their homes to the militant sect throughout 2014.

“As the capital of Borno state, Maiduguri houses many civil servants, people of note, as well as former government ministers, and in recent months, it has also come to serve as a refuge for many who have fled Boko Haram’s terror.”

This fact is clearly not lost on Boko Haram, which is why the surrounding of the capital last September was particularly chilling.

“For weeks, civilians in the northeastern Nigeria have anticipated the worst: the invasion of Maiduguri by Boko Haram. On Thursday morning, the traditional elders of Borno Elders Forum (BEF) announced that the capital of Borno State was indeed completely surrounded by the terrorists, presenting an ominous foreshadowing of what’s to come.”

Boko Haram ultimately ended up not attacking the city on that day, but in the dawn hours on Sunday, they turned their threat into a promise with hundreds of militants reportedly surrounding the city.

One resident told the BBC that loud explosions could be heard and residents were put on a 24-hour curfew.

And while Boko Haram were victorious in taking the aforementioned Monguno, the Nigerian military were able to protect Maiduguri against the terrorists.

“Nigeria’s military has repelled a new attack by militant Islamist group Boko Haram on the strategically important north-eastern city of Maiduguri, an army source has told the BBC.

“Dozens of militants and soldiers were reportedly killed during a major assault on the city on Sunday.

“The city is quiet on Monday, with some businesses open, a BBC reporter says.”

About Boko Haram’s foiled attack on Maiduguri, Borno state Governor Kashim Shettima said, “This is our land. No fear, no flight, no retreat. We should not flee. We have a history dating back 1,000 years and I swear by Allah we are going to beat [Boko Haram],” he said. 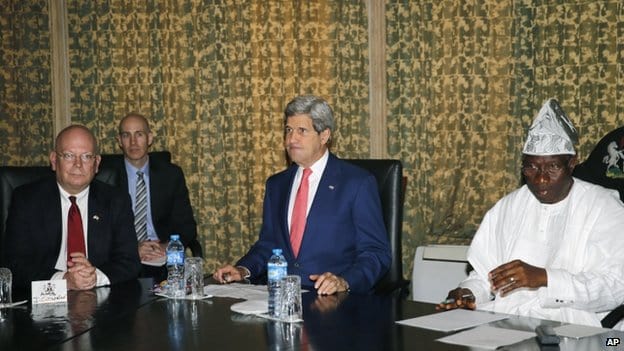 Also on Sunday, U.S. Secretary of State John Kerry (pictured) arrived in Nigeria to reportedly show support in the fight against Boko Haram and encourage peaceful elections next month.

After meeting with Nigerian President Goodluck Jonathan, Kerry said, “We are prepared to do more [to counter the Boko Haram threat] but our ability to do more will depend to some degree on the full measure of credibility, accountability, transparency and peacefulness of this election.”

While it is still unclear exactly what “preparing to do more” actually consists of, the United States has held the line in refusing to sell “lethal” weapons to Africa’s most-populous nation due to its rule that it does not sell this type of weaponry to countries who have been accused of human rights abuses.

“The U.S. government has up till today refused to grant Nigeria’s request to purchase lethal equipment that would have brought down the terrorists within a short time.

“We find it difficult to understand how and why, in spite of the US presence in Nigeria with their sophisticated military technology, Boko Haram should be expanding and becoming more deadly,” he added.