If you always wanted to visit the pyramids of Egypt, then here’s your chance: Internet giant Google has finally added a number of key sites to its Google Street View collection, allowing viewers to explore some of the most-famous pyramids as if they were on foot.

When one goes to Google Maps, one can now see 360-degree street views of the Pyramids of Giza, Saqqara, Pyramid of Djoser, the Hanging Church, the Red Pyramid, the ancient city of Abu Mena, and more.

This is the first time Google has included any parts of Egypt in its map collection.

Of the project, Google Maps Street View Program Manager Amita Khattri told Time that it was 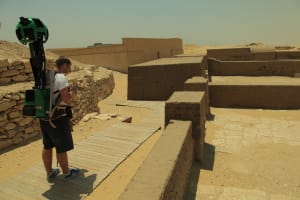 especially challenging, because rather than using their customary Street View Cars, which use 75-megapixel 360-degree panoramic cameras, they instead had to use “Trekkers” (pictured at right), team members who wear “backpack-like mounts worn by team members as they walk, hike and climb through a given location.”

“It was a unique experience for us as well, because the equipment really got tested in the heat,” Khattri says.

After taking the photos, Google then “stiches” the photos together into panoramas.