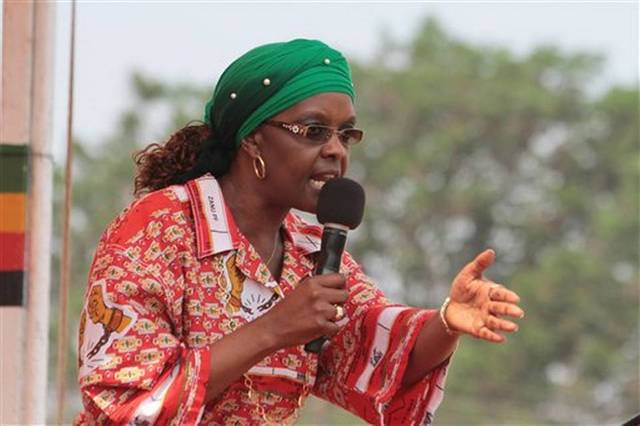 While donating gifts worth millions to the Zimbabwean people this week with her son Russell Goreraza, Grace Mugabe (pictured), the controversial wife of Zimbabwean President Robert Mugabe and recent presidential hopeful, brazenly admitted that she is bribing the public for votes, reports the NewZimbabwe.com.

During a Mashonaland Central Star rally on Wednesday, Grace, Goreraza, and her Zanu PF party peers donated tons of food and farming equipment to rally attendees.

Local traditional chiefs were given suits and shirts, as well as 20 bicycles to deploy for community use.

The first lady also had occasion to donate 20,000 litres of cooking, 15 tonnes of assorted clothing, 6,000 pairs of shoes and 531 school satchels.

For her son’s part, Grace said, “My first born said, ‘I cannot be left out. I want people from Mashonaland Central to become very sweet.’ [He] has donated 4 tonnes of sugar, 1,800 litres of cooking oil, 2 tonnes of salt.

“He then said, ‘Mashonaland Central women love bathing like yourself mama,’ and further donated 1 tonne of soap.”

Holding no punches, Grace then addressed her critics who say that she is bribing the people of Zimbabwe with her donations.

“They said I am giving people the goods as a way of buying votes,” Grace said.

“It doesn’t matter even if I bribe them and they vote for me; it’s OK. It is better to vote for someone who gives you something than someone who does not.”

Meanwhile, Zimbabwe is classified as a low-income, food-deficient country. In fact, out of 187 countries, Zimbabwe is ranked 156, according to the UNDP’s Human Development Index. Further, 72 percent of the population is living on less than $1.25 per day, while 30 percent of the nation’s rural poor are characterized as “extremely poor” as well as “food poor,” according to the World Food Programme.

And while President Mugabe is generally beloved by his people and the wider continent, he is often criticized for doing little to improve the lives of his people particularly since marrying Grace 19 years ago.

Still, his wife Grace — mocked by her critics as “dis-Grace,” “First Shopper,” and “Gucci Grace” — remains one of his most-vociferous advocates, after unexpectedly bursting on to the political scene last year.

And while there have been a number of theories as to why Grace is often found screaming in to a microphone at impromptu rallies punctuated with “gifts” or “bribes” — as she would call them — the prevailing theory is that she is looking to take over after her husband has died in order to secure both her and her family’s safety and wealth, ultimately side stepping an uncomfortably uncertain future.

An unnamed political insider recently told the Guardian’s David Smith, “The Mugabes are feeling cornered by time and circumstances. She comes across as this ambitious climber creating an image and it’s getting worse as she’s getting older. She’s experienced this massive wealth and doesn’t want to lose that.”

At a recent rally, Grace bluntly proclaimed, “They say I want to be president. Why not? Am I not a Zimbabwean?”