No less than 38 people have been killed in Haiti after a bus veered of its path and rammed in to a street parade, featuring local musicians and performers.

The bus, which was traveling from Cap Haitien to capital Port-au-Prince late Sunday, initially hit two people in the town of Gonaives, 150km from the capital, killing one of them immediately, Reuters reports.

Authorities say the driver attempted to flee the scene of the accident but then crashed in to a procession of “rara” parades.

The incident, which happened around 4 a.m. local time, left dozens dead and many more with varying degrees of injuries. 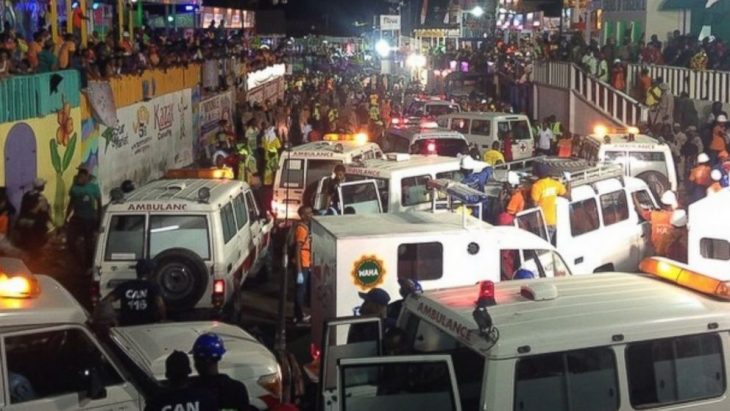 At the scene of the incident. Photo credit: Fiction News

Ford Henry, a deputy representative for the region, said that a total of 34 people were killed at the scene and an another four people died in hospital.

Reports say angry witnesses at the scene began hurling rocks at the bus and tried to set it on fire even with the passengers inside before they were rescued by local authorities.

While it is unclear what led to the accident, Henry said it was common in such situations for the driver to flee the scene to avoid a lynching by an angry mob.

“Usually the drivers involved in such accidents don’t stop because they are afraid they might be killed [in reprisal],” he said.

Haitian roads are reportedly dangerous and chaotic, with few rules observed by pedestrians, motorcyclists, and drivers.

Haiti’s rara musical parades feature local minstrels, playing traditional instruments who are joined by their audience in performing folk songs. The parades are common in the weeks leading up to Easter celebrations.

Meanwhile, Haitian President Jovenel Moise issued a statement calling for an investigation in to the incident and expressed condolences to the victims and families of those who lost their lives.