The two Namibian communities of Herero and Namaqua have now instituted court proceedings in New York against Germany for the massacres committed in the last century. The massacres were committed by Germany colonial adventurists.

Last year, DeutschWelle, a German online newspaper, reported with an air of panache that the Berlin hospital was now returning seven out of more than 1  million skulls to the Herero communities in Namibia after more than 100 years.

These are the skulls that Germany got through a repressive and murderous operation in the Herero and Namaqua communities of Namibia during the colonial resistance war of 1904.

In fact, the Germany colonial forces are estimated to have killed more than 1.5 million people during this war that involved the aforementioned communities resisting the colonial entry of Germany forces into southwest Africa.

The skulls were taken to Germany to be used in medical and racial analysis research. What is so stunning about these revelations is that the German government still refuses to apologize to the affected families in Namibia.

In addition, a decision to return the skulls to Namibia last week was in fact not an official communication from the government of Germany but a public relations gimmick by the Berlin Hospital. 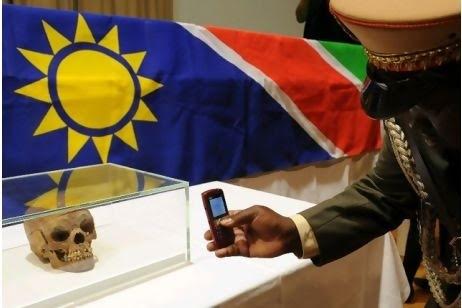 One of the 20 skulls that Germany handed over to Namibian officials. Photo credit: The National

One of the 20 skulls that Germany handed over to Namibian officials. Photo credit: the National

German colonial soldiers ferried the skulls from Namibia to Germany in a brutal manner: Some of the 1.5 million Hereroes who were taken to Germany alive were then later killed in order to extract the skulls for research.

Other Namibians were killed in the active war in Namibia, but then their skulls were given to Namibian women to clean and grind by use of broken bottle shards and then cunningly packaged as ostrich eggs to be shipped to Germany, even though Germany was fully aware of research ethics and responsible scientific research by 1900.

What made the researchers of Germany collect data for their medical research in such a brutal and dubiously unethical manner beats logic and common sense. If at all it was racism, then what type of racism was this?

Research ethics and even scientific procedure require that one avoids cruel acts to animals, plants, or human beings in one’s research, with informed consent usually being required from human participants before their involvement. At the end of the research, the researching organization is duty-bound to communicate feedback.

Obviously, for this case, Germany has crossed a number of ethical boundaries in its use of African skulls. 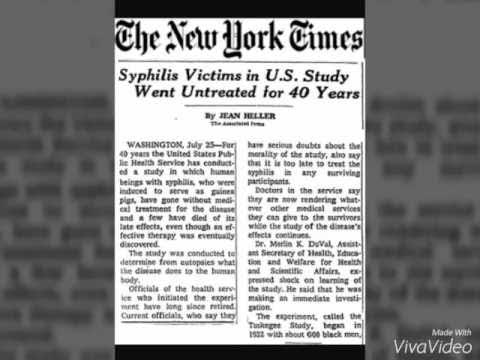 Breaking research protocol also occurred in the experience of African Americans who were victims of syphilis research starting in 1932. At the time, Black men were injected with syphilis germs by White researchers in what came to be infamously known as the Tuskegee Experiment.

For four decades, the U.S. Public Health Service (PHS) studied the effects of the untreated disease in 600 Black men from Macon County, Ala. Starting in 1932, 399 of the 600 sharecroppers to be studied were already afflicted with the venereal disease. The farmers were led to believe that they were being treated for “bad blood,” a term used to describe a number of unknown ailments. The Tuskegee Institute, also in Alabama, was the site where the study took place.

The PHS neglected to tell the men they were infected, and kept the news hidden. Even in the 1940s when penicillin was proven to be a sound treatment for syphilis, they were still left untreated.

Further comparison reveals that the first decade of 1900 was also a season of European terror in western Kenya, where the British massacred the Bukusu militia that were resisting British colonial entry.

According to Wilber Aubrey’s “Rural Rabbles” and Fred Makila’s “Outline History of Babukusu,” more than 7,000 people, including women and children of the Bukusu families, were killed in 1905 by the British colonial soldiers at Chetambe Falls, now the present Webuye town.

While the third European massacre was the Armenian massacre by Turkey colonial forces, the common feature in most of these crimes against humanity is that European Powers refuse to apologize.

Germany has refused to apologize so it won’t become accountable and then be forced to pay for its actions. The British have also failed to apologize to the affected families of the Babukusu community. And as for the Armenian massacre, Pope Francis had to take it upon himself to sensitize the world about the happenings against that particular community in a recent speech he made to the Armenian public.

However, in response, the government of Turkey also refused to apologize. Instead, Turkey leadership closed the Vatican embassy in Turkey and ordered the Vatican diplomatic workers to leave Turkey.

Another shameful incident between Africans and Europe involved African soldiers who were conscripted in to the two great wars: More than 10 million Africans died in the battlefield as soldiers.

Shockingly, none of them were brought back to be buried, and even up to today, the affected families of Africa cannot trace the remains of their relatives that died in the great wars.

Sadly enough, Europe has a long history of discrimination; in fact, out of the atrocities perpetrated during the First and Second World Wars, Europe has only acknowledged the Jewish Holocaust.

The number of Jews estimated to have been killed by the Germans is 6 million people. The current historical research shows that Africans were killed by all European forces in the wars, with the number at more than 10 million people.

In the least, African societies deserve apologies from European powers.

The Herero and Namaqua massacre was not known to the public until 1990, when Namibia became an independent state. The world and the people of Africa continue to wait for fairness to be seen in the European Massacres perpetrated in the New Worlds during the European imperial venture of the last century.