The Egyptian embassy in London has received an antiquity stolen from an ancient Egyptian temple in Luxor.

The antiquity, a limestone carving engraved with hieroglyphic symbols, was stolen from Queen Hatshepsut‘s temple, according to Fox News, and smuggled out of the country. 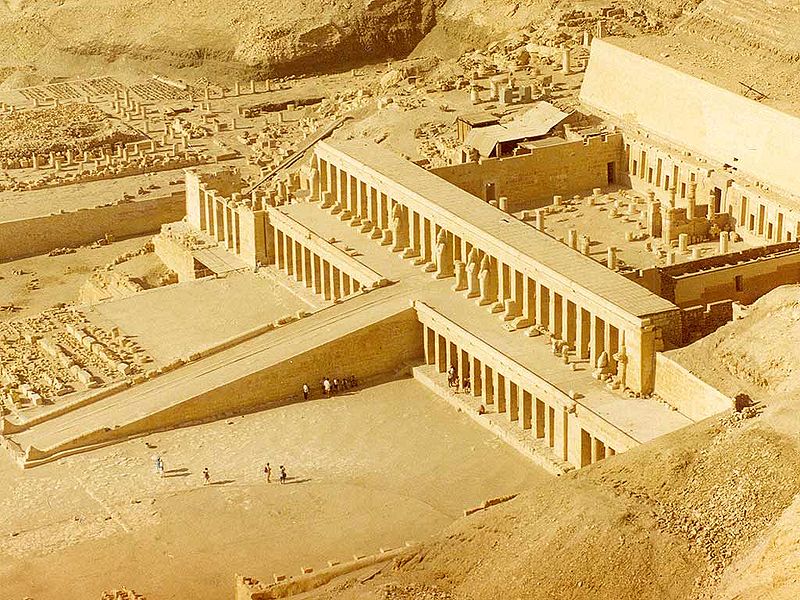 Queen Hatshepsut’s Temple in the city of Luxor is regarded as one of the greatest architectural achievement of ancient Egypt. Photo credit: Wikipedia

A statement from Egypt’s Ministry of Antiquities said the artifact was put on show in an auction hall in Spain and a British antiquities dealer bought it.

Ministry Spokesman Shaaban Abdel Gawad said that Egyptian authorities had secured the artifact through a collaborative effort with the Ministry of Foreign Affairs and the British Museum, after proving its possession.

“The recovery of the relief is very important especially since it will help in restoration work currently being carried out by a Polish archaeological mission,” Gawad said.

In the wake of the breakdown of law and order that followed the 2011 Arab Spring uprising in Egypt, thieves, robbers, and treasure hunters pillaged and plundered famous historical sites.

For example, in Tahir square, robbers broke in to the Egyptian museum and made away with 51 pieces of precious artifacts, including a statute of Pharaoh Akhenaten. Later in the year, after the fall of Hosni Mubarak’s government, Egyptian authorities caught a Jordanian man trying to smuggle over 3,000 artifacts out of the country.

As part of a campaign for the recovery of stolen artifacts, in 2014, a museum in Cairo held an exhibition specifically for a batch of priceless stolen antiquities repatriated from the West.

On display were 198 artifacts, including 90 pieces from France, 55 from Germany, and 35 from the United States, including a sarcophagus, an ancient Egyptian tablet, Roman era coins, and an ornate Islamic pulpit from around the 15th century.

With Luxor being located on the west bank of the Nile, Queen Hatshepsut’s temple is a must-see for tourists visiting Egypt. The temple is a mortuary complex that honors Queen Hatshepsut and is regarded as one of the greatest architectural achievements of ancient Egypt.

Built using a technology that was far ahead of its time, the Hatshepsut temple resembles the classical roman architecture that became popular nearly 1,000 years later.