After close to four decades of ups and downs, Zimbabweans are finally witnessing the transition of power, a phenomenon they have longed for since the country attained independence from Britain in 1980. Despite his unyielding resolve to hold on to power, the first and only President of Zimbabwe Robert Mugabe has been deposed by the country’s military.

Rumors of a potential military coup in the South African nation emerged on Tuesday afternoon after two military tanks were spotted heading to the Zimbabwe’s capital Harare. Reports later emerged that the 93-year-old president had been captured and placed under house arrest.

Although the Zimbabwean military insists that the operation was just a bloodless transition, the African Union says it looks like a coup.

But how did it come to this? Why would the Zimbabwean military opt to capture and put a 93-year-old head of state under house arrest? The truth is that President Mugabe is loved and hated in equal measure.

Born in 1924 to a poor family in Kutama, Southern Rhodesia (now Zimbabwe), Robert Mugabe or “Uncle Bob”, as many Africans like to call him, started out as a schoolteacher following a successful completion of an under-graduate degree at the University of Fort Hare. He taught in several schools in the country and in Ghana.

In the early 1960s, Mugabe got fed up with the white minority rule in Zimbabwe and so he embraced Marxist ideologies with the aim of pushing for an independent black-led state. For ten years, starting from 1964 to 1974, Mugabe was detained for making anti-colonial statements.

Upon his release, the schoolteacher turned freedom fighter fled to neighboring Mozambique where he established a political party, Zimbabwe African National Union (ZANU), which led the Rhodesian Bush War in the late 1970s, fighting the British forces.

With Mugabe as its president, ZANU was later transformed into ZANU-Patriotic Front (ZANU-PF) and spearheaded negotiations with the British administration for the independence of Zimbabwe. The negotiations led to the Lancaster House Agreement, which put an end to white minority rule in Zimbabwe in 1980.

A general election was held in April 1980, in which Mugabe’s ZANU-PF emerged victorious. As the head of the party, Mugabe automatically became the Prime Minister of the newly renamed Zimbabwe. 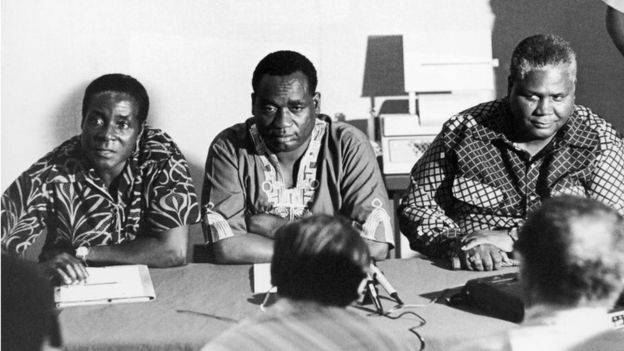 Mugabe’s reign focused on decolonization of Zimbabwe, emphasizing on land redistribution and the expansion of healthcare and education. Frustrated by the slow process of land redistribution, Mugabe encouraged locals to forcibly retake farms owned by white farmers. This made him very popular among native Zimbabweans who saw him as their liberator.

However, the move led to a drastic drop in food production in the country, causing famine, economic slump and international sanctions. Some people argue that Mugabe became a dictator after the death of his first wife Sally Mugabe in 1992, while others maintain that the former freedom fighter has always been an authoritarian since he assumed office in 1980.

Although he was re-elected in 2002, 2008, and 2013, Mugabe has always been accused of conducting divisive campaigns dominated by violence and electoral malpractices. He has also allowed his friends and relatives to loot the public coffers, leaving the country’s economy on its knees.

His second wife Grace Mugabe, who allegedly used to be his secretary, has been living a lavish lifestyle, buying expensive cars, jewelry and rental apartments, both locally and abroad. Sadly, all this looting has been happening against the backdrop of widespread poverty, unemployment, cash shortage and hunger in the country.

Despite his advancing age, Mugabe had vowed to continue holding on to power, with his controversial wife even suggesting that he would continue to rule Zimbabwe from his grave. But the veteran President seems to have sealed his fate when he fired his longtime deputy and loyalist Emmerson Mnangagwa last week.

Local political experts say the abrupt sacking of Mnangagwa was meant to clear the way for Grace Mugabe to take over as vice-president in readiness for the top seat when her husband exited. But the idea of Grace succeeding Mugabe appears to have rubbed many Zimbabweans the wrong way, forcing the military to take over the government.

It is not yet clear how long the army intends to detain Mugabe or if there will be any charges to be leveled against him. Regional leaders are now calling on the Zimbabwean army to ensure democracy returns to the country as soon as possible.