Authorities have arrested at least 100 people in connection with protests over the use of French in schools and courthouses in the English-speaking regions of Cameroon. The BBC reports that there was tension in Cameroon’s northwestern city of Bamenda on Tuesday after at least one person was killed and many others were injured. Businesses and schools were forced to close as thousands of demonstrators took to the streets to protest what they claim is discrimination against English-speaking minorities in the country’s north western and south western regions.

English speakers argue that in addition to being excluded from top civil service jobs, official government documents are often written in French with no English translations, even though both are recognized as the country’s official languages.

Cameroon was first colonized by the Germans, but by the end of World War I the area was divided between Britain and France.  In 1961,the British-run region in present-day southern Cameroon joined the larger French-speaking parts, forming the Republic of Cameroon.

In the past, teachers in English-speaking regions have spoken out against the employment of French-speaking teachers in primary and secondary schools. Lawyers in the region also say they are opposed to working with court employees who are not familiar with the application of British common law. 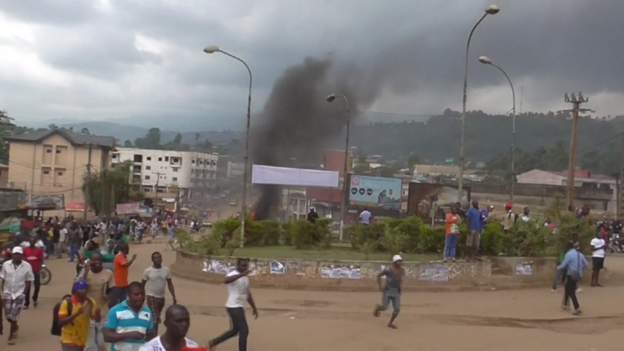 English-speaking Cameroonians are protesting the use of French in schools and courthouses. Photo Credit: Today.ng

According to Reuters, protesters were also demanding independence for the northwest and southwest region, where English is predominantly spoken. There are eight other semi-autonomous regions in the predominantly French-speaking country.

Cameroon’s Communications Minister, Issa Tchiroma Bakary, insisted that the protests are not a reflection of the public disaffection over President Paul Biya’s 34-year rule.

“There are some politicians who are using the situation as a tool for leverage to pursue their own interests.”