Morocco on Tuesday led eight other countries on a boycott of the ongoing African-Arab summit in Equatorial Guinea. Morocco, Saudi Arabia, United Arab Emirates, Bahrain, Qatar, Jordan, Yemen, and Somalia withdrew their participation to protest the presence of the Polisario Front at the summit. The Polisario Front is an armed separatist movement calling for the independence of the Western Sahara from Morocco. According to Africaintels, Morocco felt its sovereignty threatened by the inclusion of the Polisario Front in the summit talks.

Western Sahara, a mineral-rich region located south of Morocco, is a former Spanish colony. When the Spanish occupation ended in 1975, Morocco moved in and annexed the region. The Polisario Movement was formed soon after as an armed pro-independence group.

Morocco however continues to maintain that Western Sahara is a part of its territory and has by way of compromise proposed a semi-autonomous government to administer the region. In 1991, Moroccan authorities and rebel fighters from the Western Sahara agreed to hold a referendum to settle the status of the region once and for all, but the referendum was never held. 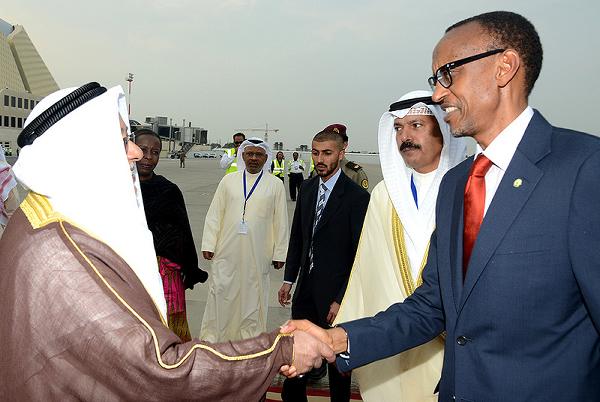 Rwandan President Kagame pictured as he arrived at the third African-Arab Summit in Kuwait.
Photo Credit: News of Rwanda

Morocco’s has repeatedly accused Algeria, its neighbor to the east, of supporting and sponsoring the Polisario Front, which it describes as “the presence of the emblem of a puppet entity.”

The international community is split over whether to recognize Western Sahara as an independent nation state. Morocco’s strongest allies, most of them in the Arab world, have recognized Morocco’s sovereignty over the region, but many of the member countries of the African Union (AU) appear to lean towards granting the Western Sahara full independence.

In 1984, Morocco rescinded its membership of the AU, to protest the Pan-African body’s recognition of Western Sahara. However, earlier this year Morocco submitted an official request to re-join the AU.

A statement released by Morocco’s Foreign Affairs Ministry over its decision and those of its allies to boycott the summit read in part:

All these countries back Morocco in conformity with the principles of international law, including the respect of sovereignty of countries and their territorial integrity.

The African-Arab summit is an initiative that seeks to implement the millennium development goals in Africa and the Arab world. The summit aims to bridge the gap between finance institutions, developmental authorities, and the business community in both regions to mobilize resources.

The on-going summit in Equatorial Guinea is the fourth since its inception.