CNN reports that the Category 4 storm has killed at least seven people in Haiti and the Dominican Republic.

According to a statement by the U.S. National Hurricane Center (NHC), Hurricane Matthew made landfall near Les Anglais, Haiti around 7 a.m. ET.

Considered one of the most powerful tropical storms to hit the Atlantic in nearly a decade, Hurricane Matthew is traveling at wind speeds of 145 mph (230 kph). BBC reports that a key bridge collapsed along a highway in the town of Petit-Goâve, effectively cutting off Southern Haiti from the capital, Port-au-Prince.

The NHC had warned that the hurricane had the potential to cause major damage when it hit Haiti, due to the slow moving nature of the storm coupled with Haiti’s mountainous terrain. The potential for flash floods and mudslides remains high due to how much rain has fallen in such a short period of time.

A video posted by Foundation Marie (@foundationmariehaiti) on Oct 4, 2016 at 1:02pm PDT

A number of shelters have been set up in Haiti’s major cities, as government officials and aid workers have worked tirelessly to convince residents in low-lying areas to use them. Many are refusing to leave their homes, more worried about looters than the storm, according to NBC News.

“We’ve already seen deaths. People who were out at sea. There are people who are missing. They are people who didn’t respect the alerts. They’ve lost their lives,” Interim Haitian President Jocelerme Privert told the press.

In the U.S., state of emergencies have been declared in three states, including all of South Carolina and Florida and parts of North Carolina and Georgia. 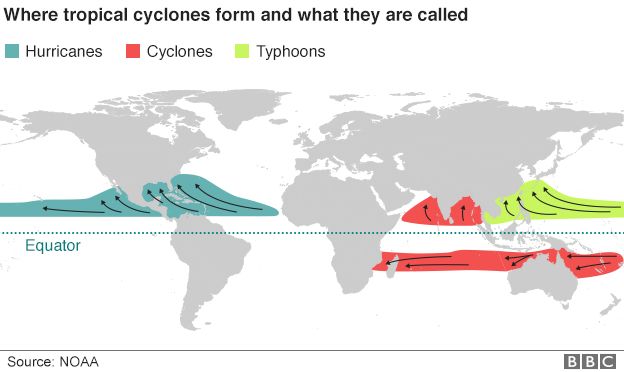 Map showing the world’s seven tropical cyclone basins and what the storms that form there are called. Credit: BBC

As a Category 4 storm, Hurricane Matthew is capable of causing severe damage to well-built homes and snapping or uprooting trees in its wake. The NHC says that the storm has already caused extensive damage and flooding in southwest Haiti, with the coastal town of Les Cayes facing an intense downpour that has damaged roofs and flooded roads.

Haiti, which is one of the world’s poorest countries, was hit by a deadly earthquake in 2010 and aid workers fear Hurricane Matthew could make things worse on the ground.  Following the 2010 earthquake, an outbreak of cholera killed an estimated 10,000 people and many Haitians continue to live in temporary shelters.

UN Special Representative for Haiti Mourad Wahba said at least 10,000 people were in shelters and there were reports of overcrowded hospitals suffering shortages of fresh water.

UNICEF warned that more than 4 million children may be exposed to the damage of Hurricane Matthew.

“This is the worst storm Haiti has seen in decades and the damage will no doubt be significant,” said Marc Vincent, UNICEF Representative in Haiti.

“Water-borne diseases are the first threat to children in similar situations – our first priority is to make sure children have enough safe water,” he added.

Hurricane Matthew is expected to turn towards Jamaica, Cuba, the Dominican Republic, and the Bahamas in the coming hours and days, with an NHC statement forecasting:

“On the forecast track, the eye of Matthew will move near eastern Cuba later [on Tuesday], and move near or over portions of the south-eastern and central Bahamas [on Tuesday night] and Wednesday, and approach the north-western Bahamas on Wednesday night.” 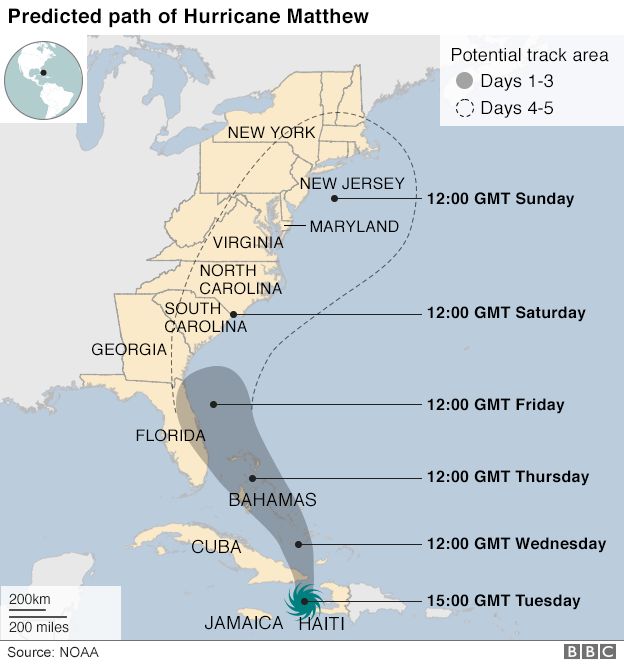 Hurricane alerts have been issued in six provinces of eastern Cuba and several thousand people have been moved to safety in the Dominican Republic. Jamaica’s capital, Kingston, has already been hit by torrential downpour with flood water rising significantly.