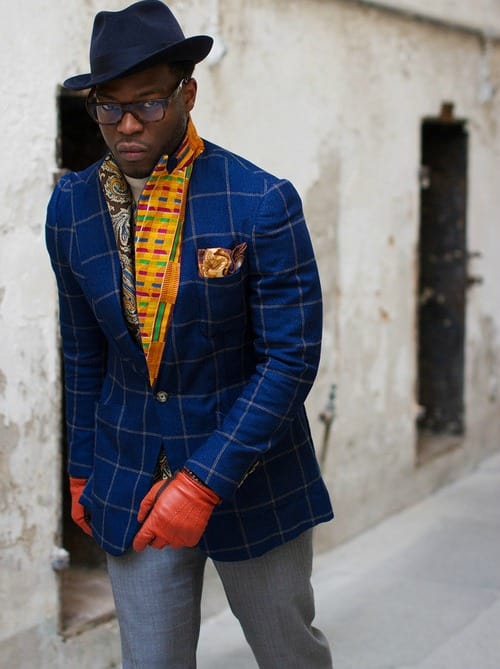 The world of high-end men’s fashion is stocked with big-name designers and lines. And the sartorial needs of today’s man are being met in a variety of innovative ways, with key designers continuing to inject boldness and fresh expression in to their fashion. For Wale Oyejide (pictured), his menswear brand, Ikiré Jones, blends West African and European influences, making fashion a cultural statement.

Face2Face Africa spoke with Oyejide about the Ikiré Jones and how he came to embrace fashion as a career and not simply a lifestyle choice. Raised in Nigeria and leaving the country as a teen, the former attorney’s worldview was broadened early on, yet he retained strong ties to his African heritage. And with Ikiré Jones, the connection is both evident and necessary.

Face2Face Africa: Explain for us the meaning of your company’s name.

Wale Oyejide: Ikiré is the name of the village my father grew up in. Jones is my wife’s family name. It’s very much the idea of literally and figuratively marrying [African and African-American] cultures. It was important to show that Ikiré Jones had its feet in both words. Sure, Ikiré brings the African connection and Jones brings the African-American line. I want this to be seen as both an African and a Black American thing.

F2F Africa: Many Black Americans lack a connection to their culture for a variety of reasons. As an African native, does that close connection to your culture inform your work?

WO: I realize I’m very lucky, because many African Americans don’t have something that a lot of Africans take for granted and you can’t really fault us. We grew up thinking your culture is naturally who you are. Many of us don’t get to think of this giant gulf or void of culture because we simply just lived it. Speaking for myself, but I’m sure other Africans can relate, we don’t think about that connection until we get here [the States] and meet people who don’t have that connection.

So coming here, if you’re a person who has creative tendencies, we’re trying to tell stories about who we are. We’re trying to show our perception of the world via our creative means. So whether I was doing Afro-Beat music or whether I’m doing clothing influenced by European style and African style, it’s just me trying to figure out who I am as a person raised both in African and America.

F2F Africa: Your clothing definitely displays expressive style, but was it intentional for it to look as bold as you’ve made it?

WO: I definitely didn’t grow up wanting to be the most-fashionable guy. There is a stereotype, and it’s often true, that Africans love to dress flashy. If we’re going to an event, it’s quite important to look good doing so and wearing the right fabric. I didn’t get in to that until I became a man, personally. So I grew up dressing regular, but as I aged, I got a reputation of a dude who can dress well, which is fine but it wasn’t like I was trying for that.

People would walk up to me and ask where I got my clothing, and I rattled off these various brands and I realized that I was indirectly making money for other people. These designers don’t care about me or what I look like in their clothes. These designers weren’t benefiting me like I did them. So I decided why not make something that reflects me. You don’t want to talk about things like you’re curing cancer, but everyone has a right to tell their own specific story. My clothing represents me and there is pride in that.

F2F Africa: You left the world of hip-hop production and Afro-Beat, became a lawyer, and now you’re in fashion. Is clothing where you think you’ll remain?

WO: I approached my music with the hip-hop viewpoint of digging in the crates. Me searching for fabrics is my new way to creatively express myself. I couldn’t imagine I’d ever fall out of love with music but life happens and you have bills to pay. Yes, I enjoyed it and I had great moments, but it waned. Like most creative people, it’s an endless chase to find that creative high again. Clothing gives me that. Some people are built for different things, and it was my time to find that.

F2F Africa: Ikiré Jones is some of the brightest clothing for men around. How did you arrive at that place?

WO: Nine times out of 10 when you see someone wearing an item that’s bold or bright, they’re doing it for a joke or they’re perceived as some sort of joke. As for me, I’ve been fortunate to see the world and realize bold colors on men is not a new thing. What I’m doing with Ikiré Jones isn’t exactly new. In certain cultures, people present themselves in big ways. Color is not something African men are afraid of.

Yes, my work is bold and bright, but it’s tasteful; we’re not doing cartoonish work. We’re making something that when a person wears it, they do so with the confidence expected. It’s very much about conviction.

Oyejide recently launched the Spring/Summer 2014 line for Ikiré Jones. The are six jacket styles: the Miller; the Reid; the Kèhindé; the Asbury; the Evan; and the Lim, which are all handcrafted in Philadelphia. There are also six-pocket squares that can add to the look, along with three scarves that help to blend the entire Ikiré Jones angle in full. The squares and scarves are printed in England.

Oyejide handpicks all of the fabrics himself, oversees the design aspects, and works with an experienced tailor who has crafted high-end clothing for top clients.