Kenya, like many other African countries, banks on wildlife to support its economy through tourism. But lately these valuable national resources have faced immense danger of extinction, thanks to the merciless practice of poaching.

Thousands of indigenous wild animals like elephants, rhinos, and cheetahs have died at the hands of poachers, who make millions of shillings from the sale of ivory and other animal organs.

The good news is that Kenya appears to be slowly winning the war on poaching. Conservationists are even optimistic that mass slaughter of wild animals could soon be a thing of the past.

Since 2013, elephant deaths in Kenya as a result of poaching have reduced by 80 percent while rhino deaths have decreased by 90 percent, according to Paula Kahumbu, CEO of WildlifeDirect, a Kenyan nonprofit organization championing wildlife conservation.

While appreciating the reality that poaching still exists in Kenya and neighboring countries such as Ethiopia, Somalia, and Tanzania, Kahumbu explains that Kenya has made significant progress against poaching, as measured by the following accomplishments:

In the past, the war on poaching was left to state security agents, which made it convincingly impractical for the Kenyan government to stop animal slaughter. According to the WildlifeDirect CEO, the public has come on board at last, volunteering information that helps security agents to apprehend poachers and avert incidents of poaching before they happen.

Using local and international media, Kenyan conservationists have been able to put their message across to a broad audience, sensitizing the public and poachers on the dangers of poaching. Through media coverage, these animal defenders have managed to force the government to take action. A good example is the recent destruction of 105 tons of ivory by President Uhuru Kenyatta. 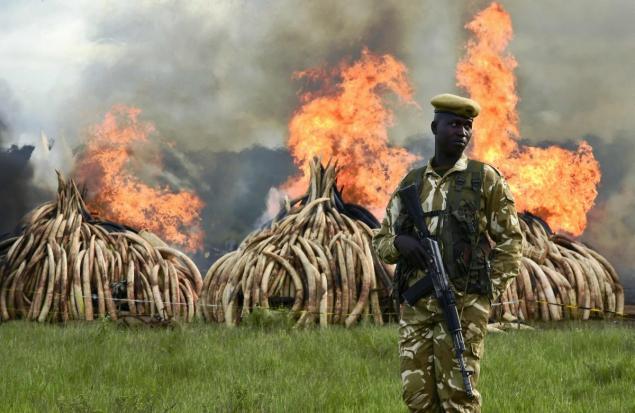 A Kenyan wildlife ranger stands next to piles of ivory that was set ablaze by President Uhuru Kenyatta. Photo (ctbc.com)

In recent years, several prominent and influential people have come forward to support Kenya’s war on poaching. Since he took up office in 2013, President Kenyatta has been emphatic in encouraging Kenyans to safeguard wildlife, which is a major national heritage. Her Excellency. First Lady Margaret Kenyatta has also been unequivocal on the need to end poaching.

For the first time ever, the Kenyan government appears to be genuinely involved in the fight against poaching. Kenya Wildlife Services has recently launched a project that uses drones to monitor national parks and reserves. The program is estimated to cost close to $103 million.

According to Kahumbu, harsh penalties imposed on poachers – including life imprisonment – are a major reason that poaching has gone down in Kenya. In 2013, the Kenyan parliament passed the Wildlife Act, which classifies poaching among other serious offenses such as drug trafficking.

While Kenya is slowly winning the war on poaching, there is still much that needs to be done to sustain the progress. In her recent report published by the Guardian, Kahumbu insists that the Kenyan government must ensure poaching cases are handled appropriately and that foreign high-level traffickers should not be deported but rather tried in Kenyan courts.