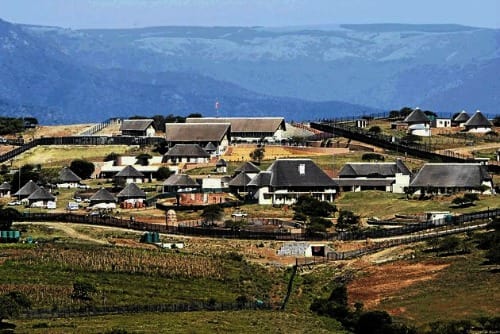 South African President Jacob Zuma (pictured below) has been under intense scrutiny, after his office approved the use of taxpayer funds to improve security at his Nkandla home (pictured). President Zuma claims that the improvements came after thieves broke in to his home and raped his wife just over a decade ago.

Zuma was found to have spent 246m rand in funds, which is roughly around $23 million USD,

and addressed the media on Monday regarding the scandal by saying the spending was not out of the ordinary for a leader of a nation.

“So the issue of security at Nkandla has not been a theoretical issue. Further, there was a court case about it. So those who say you need security, it’s not because it’s just a normal thing. Two serious incidents had happened to my home. One, burning it, not once, twice.

“Second, break in by criminals, raping my wife, they were arrested, charged, convicted. And people who are in government, once Zuma became the president, they had to raise the level of security to that one of a president. I don’t think there’s anything abnormal about it.”

The news of the personal spending broke earlier this year when Public Protector Thuli Madonsela revealed details of her two-year investigation.

Zuma added an amphitheater, helipad, a medical clinic, staff houses, playing fields, a tuck shop, and a visitors center, among other big-ticket items, at his home in the impoverished KwaZulu-Natal province.

It is not known which of his wives was allegedly the victim of the assault.

Zuma’s African National Congress (ANC) party has not been damaged by the scandal, although Zuma has slipped in popularity. The nation will hold elections this Wednesday, and it is expected by political experts that the ANC will rise again atop the polls.

Meanwhile, Madonsela, who is part of the ANC, has been attacked by fellow party members who see her as meddlesome.