Calling all young, smart, ambitious African women in the diaspora! The SheHive, brought to you by She Leads Africa, is coming to New York from the 2nd-5th June. SheHive is a 4 day boot camp which brings together young female professionals and entrepreneurs to learn new business skills, network with their peers and connect directly with potential mentors and investors. SheHive NYC also aims to reconnect participants with the continent, providing a space for them to meet and network with fellow young ambitious African women living in the US.

SheHive NYC also aims to reconnect participants with the continent, providing a space for them to meet and network with fellow young ambitious African women living in the US.

Whether you’re interested in building a business or launching a career in Africa, there will be something for you at SheHive NYC. She Leads Africa believes that young women have an important role to play in Africa and the diaspora and they hope you will join them to be apart of this transformational experience.

Confirmed speakers for SheHive NYC include: 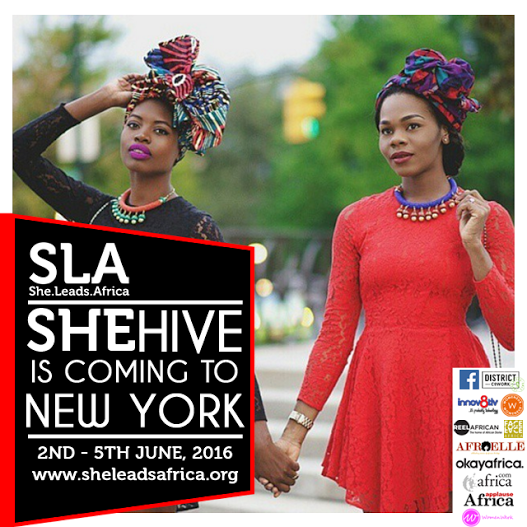 Speaking about the #SheHiveNYC, She Leads Africa co-founder Afua Osei said: “In the US and

In the US and UK, men dominate the business and corporate landscape but with so many new industries being created in Africa and for communities in the diaspora, we have the opportunity to change things now. Young women should be encouraged to take leadership roles in startups and corporate organizations and supported along their journey towards professional success. It doesn’t matter if you’re first generation, a recent expat or African American, we all have a shared history and opportunity to make things better.

Some of the topics being covered at SheHive NYC include:

#SheHiveNYC is part of the SheHive Tour which will take the bootcamp to 7 cities in 2016. Previous editions have been held in Lagos (September 2015), Accra (January 2016),  and Abuja (May 2016). Former participants have described it as a life changing experience. One participant described how implementing a marketing tactic she learnt at SheHiveAccra helped her close a sales lead the very next day.

Tickets for #SheHiveNYC are quickly selling out and so interested participants are encouraged to secure their spots as soon as possible. Passes are still available here.

Companies looking to partner with She Leads Africa can reach out by contacting info@sheleadsafrica.org.