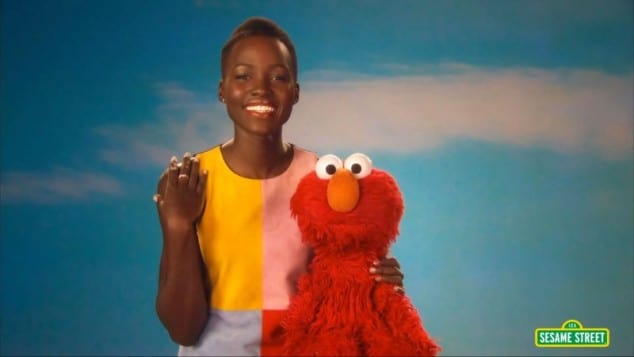 Kenya’s Oscar-winning actress Lupita Nyong’o (pictured) stopped by “Sesame Street” with a message about loving the skin that you’re in.

The beauty is featured in a segment with “Sesame Street” star Elmo, teaching kids the importance of skin loving and its significance.

“Skin comes in lots of beautiful shades and colors,” Nyong’o says after Elmo notices that hers is a “beautiful, brown color.”

To which Nyong’o responds, “That’s the thing I love most about skin, Elmo. Skin comes in lots of beautiful shades.”

“Elmo’s skin comes in a beautiful red,” Elmo says. “You know what, Ms. Lupita, Elmo loves the skin he’s in.”

The “Star Wars: Episode VII” actress has previously opened up about her insecurities about her dark skin growing up.

“What an incredible journey to go from that feeling to being on the cover of this magazine,” she said, after being named to People Magazine’s “Most Beautiful” honor in April.

“I mean, you could have never told me that, that would happen when I was 16 and insecure about my complexion.”

Lupita has taken a platform in favor of celebrating positive body images, self-confidence, and self-worth — a stance she’s reiterated several times throughout her public appearances.

In February, shortly after her Academy Award win for “12 Years A Slave,” the actress delivered a moving speech about perceptions of beauty in the entertainment industry at the Black Women in Hollywood Luncheon.

“I hope that my presence on your screens and in the magazines may lead you, young girl, on a similar journey,” she said.

“That you will feel the validation of your external beauty but also get to the deeper business of being beautiful inside. There is no shade in that beauty.”

Nyong’o was soon named a brand ambassador to Lancome in April, and said in a statement that she was “particularly proud to represent its unique vision for women and the idea that beauty should not be dictated.”