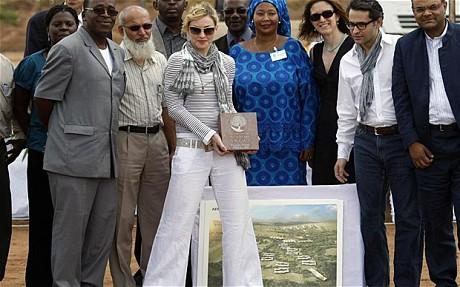 In late 2009, media outlets were buzzing with news of Madonna’s ceremony to start construction on her new school called Raising Malawi Girls’ Academy. The school, however, was never built.

The plan was to build the school in Chinkhota, Malawi, which according to the BBC would have cost around $15 million.

Malawi’s tourism minister, Damiel Liwimbi, said that the cabinet decided to build a heroes’ acre at the site. This will be a monument to national heroes. The construction will cost millions of pounds. Liwimbi added, "Malawians deemed to have done a heroic endeavor of national importance, and selected by committee, which will scrutinize whatever they did, will be buried there."

Madonna, who has adopted two children from the country, had many perfectly scripted things to say while at a ribbon-cutting ceremony for the school project back in 2009. "Growing up in a privileged life, I took education for granted, but coming to Malawi has taught me a lot of things and learned to appreciate what life gives," said Madonna.

While the effort is somewhat positive, Madonna failed to realize that an entire country does not exist to make her more self-aware. She also said, "I realized how much they deserve to be educated and so for me the best thing I could do was to build a school, a unique school that will create future female leaders, scientists, lawyers and doctors. If this school is successful, it will be used as a model to replicate it in other countries," she said.

This attitude completely disregard the other strives made by Malawians themselves in regards to education. In addition to having thousands of primary schools, Malawi also has many secondary schools and several universities. This is not including the thousands of other schools that strive across the African continent, especially universities in west and north Africa.

The Guardian reported that the site of Madonna’s proposed school looks like a “quarried mine, with little activity beyond footballers kicking a ball around.” After Madonna and her charity, Raising Malawi, announced that the girls’ academy would no longer be built, they said that they were partnering with non-profit group buildOn to build ten schools instead.

Raising Malawi claimed that a third of these schools were completed last month and that they would support scholarships for ten girls to attend four years of secondary school.

Joyce Banda, Malawi’s president, showed ample skepticism about Madonna’s true intentions for Malawi. She said, “Madonna came to Malawi and Madonna came to build a school, an academy like the one Oprah [Winfrey] built [in South Africa], but she changed her mind so I have a problem with a lot of things around the adoption of the children and the changing of the mind and then coming back to build community schools."

This kind of savior attitude when it comes to helping nations in Africa is extremely damaging to not only the global perspective of African nations but also to their well-being. Many countries, most notably the U.S.A. and the U.K. perpetuate damaging viewpoints of African nations as desperate or helpless. This leads to celebrities and politicians making empty gestures of help in order to pursue their own agendas.

The KONY 2012 epidemic is a prime example of what that kind of attitude can do. People are willing to give money to ‘get the bad guy’  but cannot show you where Uganda is on the map, let alone realize that many of these towns are still struggling and that there are several Konys involved with the Lord Resistance Army (LRA).

There are too many non-African charities making money off of the westerner’s desire to pat themselves on the back and feel guilt-less about the system of global violence and oppression that they participate in.

Thankfully there are organizations that fight to show that the peoples on the African continent are not one homogenous helpless group of people, but rather are rising above the limitations and crippling violence that are the marks left behind by colonialism.