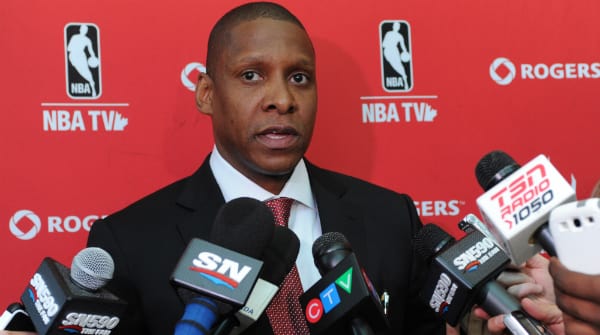 With all of the controversy around Atlanta Hawks Danny Ferry describing South Sudanese, Miami Heat player Luol Deng as having “a little African in him,” Toronto Raptors’ General Manager and Face2Face Africa Trailblazer Honoree Masai Ujiri decided to weigh in on the issue as a good friend of Deng. Below are excerpts from his Thursday op-ed on the issue.

Describing the context of the exchange that occurred, when Ferry made his questionable statement, Ujiri wrote:

Danny Ferry thinks Luol Deng “has a little African in him.”

Ferry is the general manager of the Atlanta Hawks. Luol is an NBA star.

That was one of the things Ferry said about Luol when he was assessing him as a potential recruit during a conference call with his ownership. As you may have heard, those words have caused a lot of hurt and anger.

Ujiri then goes on to describe the commitment Deng has to his people, his word, and his career:

When I first heard it, I wondered, “What does that mean?” I am an African from Nigeria. Luol is an African from South Sudan. We’ve worked together across our home continent, holding our own basketball camps, as well as in those organized by the NBA.

I remember an instance, in Kigali, Rwanda, when Luol honoured a commitment to show up despite being seriously ill. He didn’t want to disappoint any of the children who were expecting him.

Is that “a little bit of African”?

His fellow NBA players have named him the NBA’s top sportsman. Last year, his work for charity earned him the league’s J. Walter Kennedy Citizenship award.

Is that the “African” he means?

Luol has made two all-star teams. A couple of years ago, he had a terrible reaction to a spinal tap. He lost 15 pounds in the hospital. I was texting with him during that ordeal, which was very serious. He always remained humble and full of personality. When he got out, he still tried to play for his team during a playoff series.

Deeply troubled by the comments Ferry made, Ujiri then explains taking the added step of reaching out to Ferry himself:

I spoke to Danny myself about this. He started off by apologizing to Luol. He apologized to me and apologized for any insult he’d offered to African people in general. He explained the incident as best he could to me. There are some things about that conversation I would like to keep between the two of us, but I came away feeling like I’d understood what he had to say.

Still, Ujiri concluded that even with all of the apologies and alleged misunderstandings, with Ferry’s statements, a line had been crossed:

I have no idea what is happening in the Atlanta Hawks organization, but I do know how the scouting world works. We all have different ways of sharing information about players and different vocabularies to do so. It crossed a line here.

That said, we are all human. We are all vulnerable. We all make mistakes.

You discover a person’s true character in their ability to learn from and then move on from those mistakes. One of the truly important things we must learn is how to forgive.

Danny’s mistake will remain tied to him for a long time. What he’s said can’t be unsaid, but we must measure his heart. If he has made an honest, isolated error, we should forgive and move on.