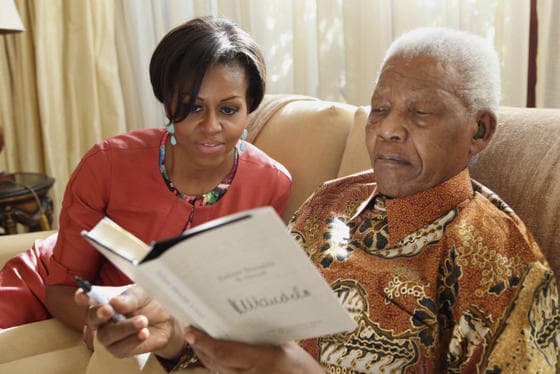 The first lady met with Mandela after visiting the archives at the Nelson Mandela Foundation in Johannesburg. This was the first meeting between American’s first black first lady and the political prisoner who later became his country’s first black president.

Mandela, who stepped down in 1999 after serving one term as president of South Africa, is barely seen in public anymore. The 92-year-old hero is in frail state of health and rarely receives visitors, however he felt healthy enough to invite the Obama family to visit.

This tour is the first lady’s second official solo visit abroad since her husband Barack Obama became president in 2009. President Obama previously visited Africa to meet Mandela when he was a U.S. senator. The two have spoken several times by telephone since Obama took office. Obama also wrote a foreword to Mandela’s book, “Conversations with Myself.”

The first lady is seen as a role model in her own right. She will meet South Africa’s young women leaders on Wednesday as she makes her keynote address.