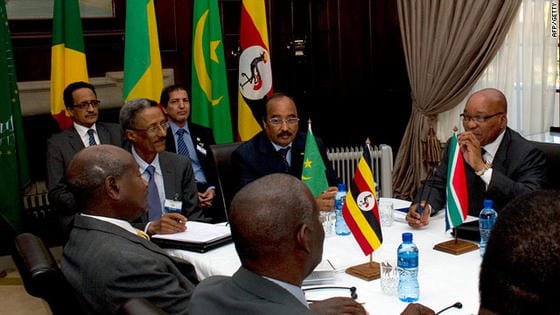 Mommar Gaddafi, leader of Libya, will not be included in AU peace talks with Libya.

A statement from the African Union states: "The AU high-level ad hoc committee welcomes Colonel Gaddafi's acceptance of not being part of the negotiation process."

According to reports from CNN, members of the AU ad hoc committee have met with Gaddafi and opposition leaders within the past three months.

Previously, Gaddafi has been noted as a supporter of the African Union. Libya also holds a seat on the AU Peace and Security Council.

The AU reports that in principle, Gaddafi has consented to stop all hostilities in hopes for peaceful intervention from outside sources. Rebels, however, rejected his proposal, stating that it provided no clear-cut solution to end violence in the country.