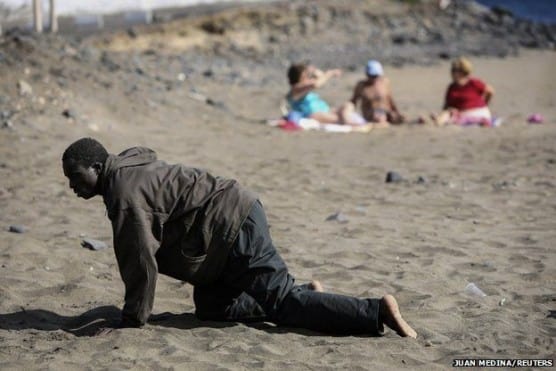 After a series of interviews, the United Nations estimates that last Tuesday’s boat capsizing is the worst incident to date for those seeking a better life in Europe via the Mediterranean Sea. The seemingly endless boats carrying both Africans and Middle Easterners — and the hundreds of deaths that accompany them — has caused many to revisit the work of photojournalist Juan Medina who gives faces and names to both the dead and the living. Read Medina’s story behind his stirring photos here.

RELATED: MIGRANT RETURNS HOME TO SENEGAL AFTER BEING DISILLUSIONED WITH LIFE ABROAD

On why Medina chose to record the stories of migrants with his camera, he says:

I started taking photos of migrants because I was living in Fuerteventura in the Canary Islands working as a photographer for the local paper, and they were coming over from all over sub-Saharan Africa.

Medina took his award-winning photos back in 2004, when he witnessed a boat capsize near the Canary Islands as migrants moved to one side of the boat in order to board a larger vessel.

Twenty-nine of them were rescued. Nine died. The people on board were all men. Many came from Mali, some from Ivory Coast, and some from Ghana.

During the experience, Medina met Isa and Ibrahim (who are shown climbing on to a boat) who both left their families back in Mali for a better life. 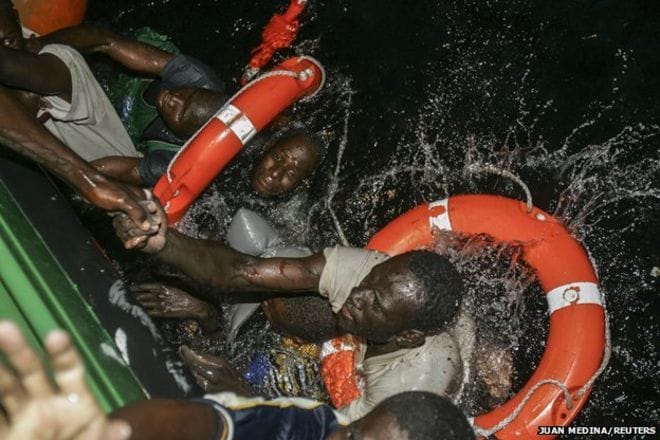 They made it very clear what was going on back home in Mali. They come from large families. In Isa’s case for example, they depend on crops and the harvest year by year. Work is scarce. They didn’t have any opportunities. They were really living in a situation of extreme need.

I went to their homes in Mali to meet their families and was greeted with open arms, with a lot of love – in the exact opposite way to how the Spanish greet migrants here. Their families told me their story so that I could understand why their sons were willing to risk their lives.

The main thing that struck me is the terrible living conditions they left behind.

They risked dying at sea but they faced even greater pressures trying to survive at home. They did it because they had no other way out. It’s not because they were adventure seekers.

Tragically, Medina, who has been covering this issue for the last two decades, says that migrants are traveling — and dying — in much the same way as the enslaved did centuries before.

Throughout history it’s thanks to photographs or articles that we know what has happened – so we know that at the end of the 20th Century and the turn of the 21st Century people travelled to the gates of Europe in much the same way slaves did in the 17th Century.

Many of them would have drowned at sea too, squashed into makeshift boats that would sink.

And people keep dying today. It’s unusual for a month to pass without a tragedy. Even after 20 years following this story, people are still drowning every week and I don’t see anything changing. If there is any change at all, it’s got worse. Each tragedy or shipwreck gets bigger and more painful because more people lose their lives. There is more police pressure on Europe’s borders than ever before – but people are still dying.