The thought-provoking play, which will run from May 31st to June 25th, is also the New York City debut of Ijames and will be directed by Saheem Ali, one of America’s most-celebrated theater directors.

In a statement, the National Black Theatre Arts Director Jonathan McCrory announced that the production will officially open on Saturday, June 3rd, with an Opening Night Gala that includes a 7:30 p.m. show followed by a reception.

However, previews of the show will kick off at 7:30 p.m. on Wednesday, May 31st, through Friday, June 2nd. All performances will be held at Dr. Barbara Ann Teer’s National Black Theatre located at 2031 Fifth Avenue between 125th and 126th Streets in Harlem.

“With ‘Kill Move Paradise,’ we are seeking to inspire our community to remember the power of joy as a tool of resistance, a mechanism forged as our sacred birthright to gain freedom in the midst of oppression,” McCrory said.

“Kill Move Paradise” is a play that seeks to shine a light on police brutality victims caught in limbo, especially in American society.

It follows four Black males who — after being ripped prematurely from Earth by police brutality, vigilante “justice,” and racist acts — confront the reality of their pasts and struggle to make sense of a new world.

The play is an expressionistic buzz inspired by the latest incidents of police brutality against Black males in America and endeavors to affirm that “Black lives matter” by depicting Black victims of police brutality as heroes who wish to be taken for the glorious beings they are and not as degenerates deserving death.

“We wanted to flip the narrative surrounding the oppressive tropes that keep us feeling helpless and stuck as a community,” said McCrory. 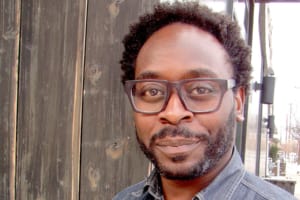 The production is a world premiere by Ijames, a Philadelphia-based actor, playwright, and director.

Ijames is also an alumnus of the InterAct Core Writers Group, a mentor for the Foundry, and a founding member of Orbiter 3, Philadelphia’s first playwright producing group.

He holds a B.A. in Drama from Morehouse College and an M.F.A. in Acting from Temple University.