Elizabeth Monye runs a snake meat restaurant in one of the suburbs of Lagos, Nigeria’s most populous and commercial city. She started her snake food business in June 2014, after she was sacked from a company that had to downsize in order to remain in business.

Monye decided to go into the business of snake food in order to be “different from the rest.”

“I have always dreamed of operating a restaurant but in Lagos there are so many people running restaurants. I didn’t want to be part of the crowd of restaurant and beer garden operators. I wanted to be different from the rest. I wanted to be unique in my own little way so that I can stand out from the crowd. It was while I was still thinking of a unique kind of restaurant to operate that a friend of mine who enjoys snake meat advised me to open a snake food restaurant and sell different kinds of dishes that contain snake meat, especially point and kill snake pepper soup.”

Sources of Snake Meat in Nigeria

Snake meat in Nigeria is sourced from both home and abroad. Some Nigerian farmers kill snakes on their farms and take them to the market with the hope of selling them at a good price. There are also snake hunters in Nigeria, that is, a group of hunters who go hunting for snakes in particular. This group of snake hunters directly supplies the snake dealers with as many snakes as they need.

However, local demand for snake meat in Nigeria is currently growing faster than the supply. As a result, the Nigerian snake market has to rely on snake meat brought in from neighboring Republic of Benin and Togo.

When asked how she gets her snake meat, Monye claims she buys live snakes and snake meat from different markets in Lagos like Jankara Market and Badagry Snake Market. “You can buy live snake, fresh snake, or dried snake meat at Jankara market or even at Badagry snake market. But if you want to buy live snakes, you need to have the means to carry it with you. If you don’t have the means to transport it, then it would be wiser to let one of the snake dealers supply it to you by delivering it straight to your shop or restaurant.

“You may not believe it, but the fact is that people come from far and wide to buy snake meat. More and more Nigerians are falling in love with snake meat and snake pepper soup is in very high demand.” 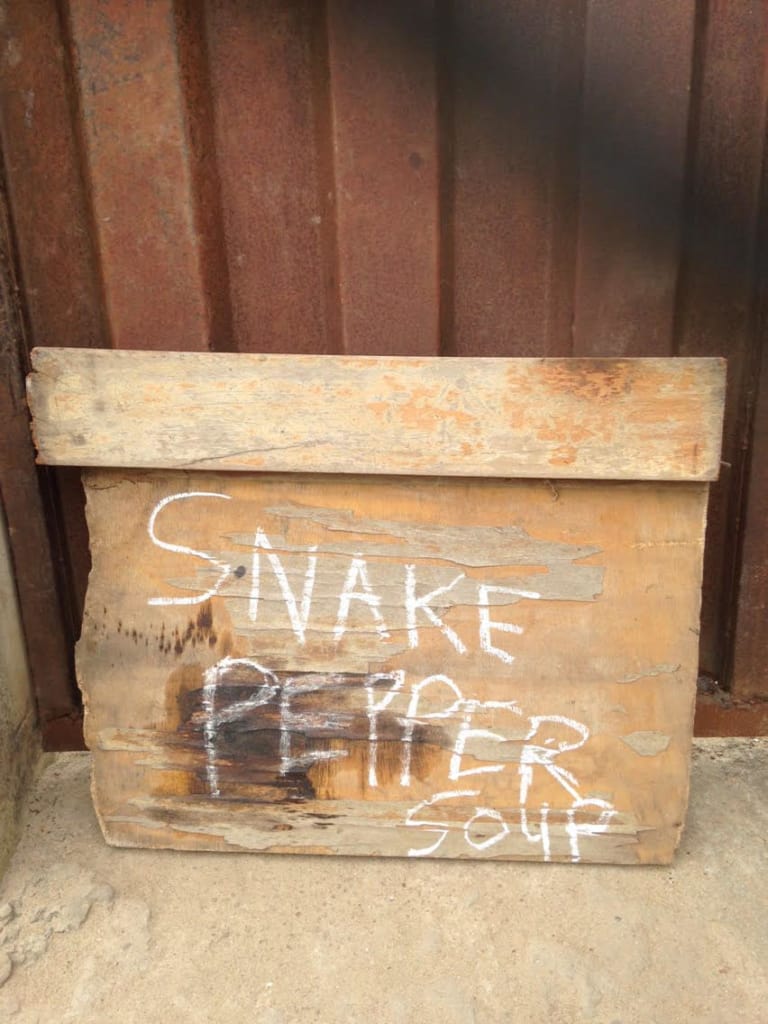 When asked how she is able to keep live snakes in her restaurant, she reveals that she has a secure makeshift structure where she houses the live snakes and cooks them for customers on demand.

“We call it point and kill, because a customer has to point at the particular snake he wants us to kill and cook for him to eat. So whenever a customer walks into our restaurant and asks for snake pepper soup, we first take him to where we keep the live snakes in a shallow pit that is covered with a very strong iron net to prevent the snakes from escaping. The customer will have a look at all the live snakes crawling around the shallow pit and point to the particular snake that he or she wants us to kill and cook for him.

“After the customer has made his choice, we will use a special instrument similar to a long pair of pincers to get hold of the snake. We use the instrument to grip the snake by the neck and bring it out of the pit, then we cut off the head with a knife and cut it in pieces for cooking the pepper soup.

When asked about the particular kinds of snakes customers prefer, she declares that fleshy and juicy serpents are the delight of customers.