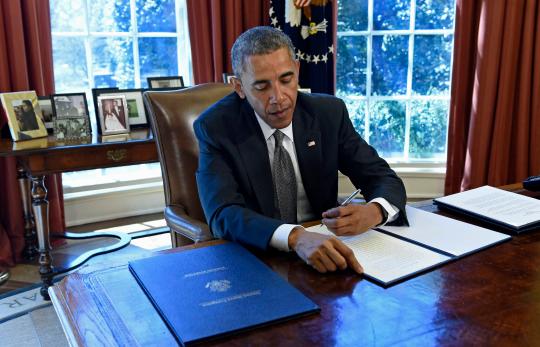 President Barack Obama (pictured) granted a reduction in prison sentences to 46 drug offenders who were charged and convicted under strict sentencing guidelines established in the ’80s. Among the 46, 14 individuals were serving life sentences and another 14 had sentences of 20 years or more.

The commuting of the offenders was done as the Obama Administration aims to overhaul the criminal justice system and implement up-to-date sentencing guidelines across the board.

According to several media outlets, President Obama has granted clemency to nearly 90 individuals since his time in office, the most since President Lyndon B. Johnson.

For decades in the United States, there has been a disproportionate rate of arrests within the African-American community as a result of the drug laws.

White offenders received less time for powdered forms of cocaine while Black and poor citizens faced stiffer penalties if they were caught with the cheaper derivative of cocaine called “crack.”

This unfair and imbalanced approached to policing drugs in the United States led to thousands of arrests and lengthy drug sentences for individuals who had previously not committed violent crimes.

Therefore, the President’s latest round of clemency is significant.

The White House released a video related to the announcement of the commutations, with President Obama explaining in grander detail the impetus behind his decision.

On Tuesday, President Obama will make an address to the National Association for the Advancement of Colored People (NAACP) and speak further about the overhaul of the U.S. criminal justice system and other related concerns.

All 46 of the men and women commuted on Monday will exit prison at the same time this November.

BREAKING: President Obama just granted clemency to 46 men and women whose sentences didn’t fit their crimes. Nearly all of these individuals would have already served their time and returned to society if they were convicted of the exact same crime today: http://go.wh.gov/KtwU7f