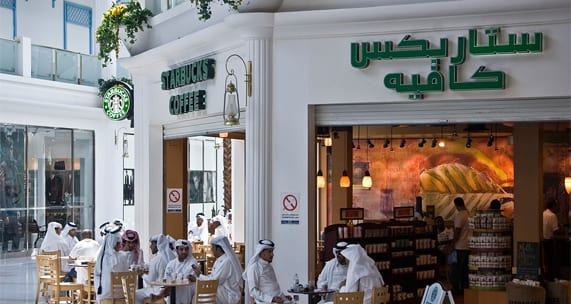 A Starbucks store in Doha, the capital city of the state of Qatar

With Africa being the next frontier, many U.S. businesses are entering its markets, and the latest business to open its doors is coffee giant Starbucks.

In January, taxi cab app service Uber announced the launch of its pilot programs in the African cities of Cape Town, Johannesburg, Durban, and Pretoria in South Africa; Lagos in Nigeria; Cairo in Egypt; and Nairobi in Kenya.

Then at the end of June, social media platform Facebook announced that they would be opening their first headquarters in South Africa.

Not to be left out, now the ubiquitous Starbucks, which has 22,000 stores internationally, says it is entering the African marketplace via Johannesburg in January 2016 through a partnership with South African franchise operator Taste Holdings.

In the company’s official statement, Europe, Middle East, and Africa Starbucks President Kris Engskov elaborates, “We are proud to be bringing Starbucks to South Africa next year.
“Working with Taste, our partner, we’re going to deliver a great Starbucks experience.

“The coffee market here is vibrant and growing fast – we want to be part of that growth,
bringing the passion and energy of this remarkable country in to the design of our first store and our first barista team. We can’t wait to get started.”

With Africa having the largest youth population in the world, it is universally agreed that employing and providing opportunities to this demographic is essential to Africa’s success.

Taste’s Changing Lanes program directly employs unemployed youth from the areas where they do business, and with their new partnership with Starbucks, they will continue to target youth.

“Young people are the key to our success,” says Engskov. “The majority of our workforce is aged between 17 and 25, so talented youth has always been a priority and we will equip our new partners with the skills necessary to succeed in today’s economy. We look forward to using our partnership to leverage Taste’s strong track record of creating jobs and developing great people.”

Taste CEO Carlo Gonzaga adds, “Starbucks supports the development of local suppliers and is fully committed to our Changing Lanes program wherein we have provided employment to previously unemployed people and expose them to global training initiatives and skills. Overall we’re a good partnership match.”

In addition to its coffee offerings and snacks, Starbucks is universally known for providing reliable wifi to its patrons. Starbucks maintains that it will extend this level of service to its African patrons as well.

Even though Johannesburg will be Starbucks first official venture in to Africa, it has already built its brand on a number of premium coffees from the continent.

Gonzaga speaks to this fact, saying, “Starbucks sources a considerable amount of its global, high-quality coffee from farms in sub-Saharan Africa, in partnership with our network of farmer support and agronomy centers in Ethiopia, Rwanda and Tanzania. We are proud to be able to offer some of the best African coffees in the world to more customers in the region.