How do you measure progress? If it’s by how well African American heritage is acknowledged by public institutions, then I have good news for you. The U.S. Department of the Treasury has announced today that Harriet Tubman, the legendary antislavery heroine, will replace American president Andrew Jackson on the front of the $20 bill at some undisclosed time in the future.

Changes to the $10 bill were announced at the same time, with a 2020 start date announced. Tubman’s $20 will be put into circulation some years afterward. The $5 bill will undergo historic changes too. President Abraham Lincoln will remain on the front with the backside of the currency bearing opera singer, Marian Anderson, civil rights icon Dr. Martin Luther King, Jr., and first lady Eleanor Roosevelt, all of whom are connected with historic events at the Lincoln Memorial.

Coincidentally, perhaps, today is the anniversary of Harriet’s membership in the Underground Railroad, a network of antislavery abolitionists who guided countless enslaved persons to freedom from bondage. She became famous for escaping slavery as a young woman and then sneaking back onto slave plantations many times as a conductor on the Underground Railroad, leading other brave and desperate people through the woods, swamps and safe houses until they crossed into states where slavery was not permitted. Eventually, they had to trek all the way to Canada to be truly free of the slave catchers, a predecessor to today’s police. 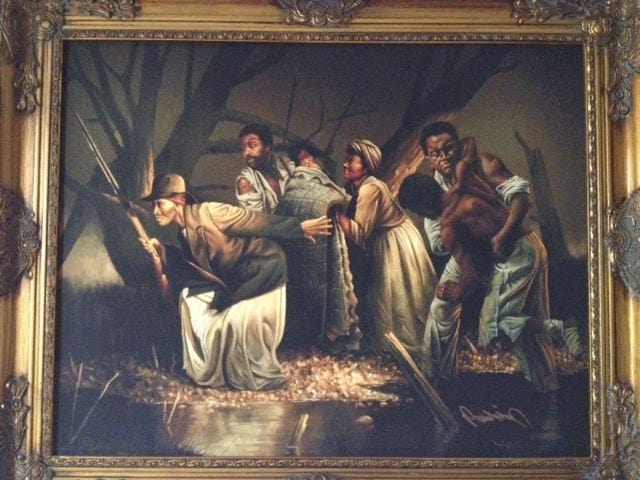 Paul Collins’ legendary portrait of Harriet Tubman shows the dangers she faced to become a legend in her own time. (Photo: beautywithoutwithin.blogspot.com)

President Jackson, on the other hand, was a wealthy slaveholder who owned up to 300 persons over his lifetime and took out more than one advertisement for the recapture of runaways. During his term as president, Jackson authorized the forced removal of Native Americans from southeastern states where they had lived for centuries before the arrival of European explorers. Sadly, he’s not completely lost in the redesign – according to the Washington Post, he will appear on the back of Harriet’s $20. 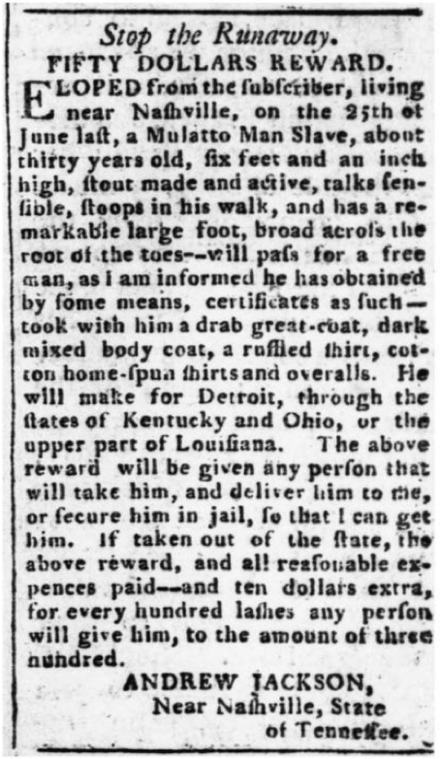 President Jackson even took out ads offering rewards for runaway slaves like Tubman and those she helped. (Photo: wikimedia)

The story of Tubman’s potential selection for the currency redesign broke last May amid a flurry of social media commentary both for and against the change. A group called Women on 20s invited members of the public to vote on their favorite woman to take over Jackson’s position. Over 600,000 people voted, and Tubman beat out a first lady and a civil rights hero to claim the spot.

Treasury Secretary Jack Lew’s announcement today made Tubman’s spot official. #HarrietTubman is already trending on Twitter with more than 325 thousand tweets logged at the time of publication. As you might expect, Black Twitter is alive and reacting, from the historical…

“Tubman’s life was offered up for five of the $20s that will now bear her image.”
https://t.co/YV11qMfctl

My grandma was around for the “whites only” era and got to see a black president and now Harriet Tubman on the $20 bill… Wow.

My grandma was around for the “whites only” era and got to see a black president and now Harriet Tubman on the $20 bill… Wow.

Not everyone was completely happy with the outcome, however. In a statement on their website, Women on 20s wrote:
until Secretary Lew commits to inclusion of women in the portrait gallery of paper currency in the near future, we see work ahead.
The group’s executive director, Susan Ades Stone went on to say:
In recent days reliable sources were telling us we wouldn’t see the redesigned $20 until 2030. Assuming this is true, we see today’s announcement as only a vague commitment and a continuation of the now familiar message that women have to settle for less and wait for their fair share.

Back on Twitter, some saw Jackson’s presence as a reason to cancel the whole idea:

While no one yet knows what the final bill will look like, a few tweeters offered suggestions:

Put Harriet Tubman on the $20 as a rebel, not a grandma! @USTreasury pic.twitter.com/uOVDTLl3cb

For some of our brothers and sisters who were born and/or live in Africa, who have grown up with national dignitaries such as Ghana’s Osagyefo Kwame Nkrumah on their currency, I could see how this may seem like a big fuss over something they take for granted.

Growing up as a “minority” in a racially charged nation like the United States, many black people cannot help but feel a sense of pride and progress to see one of “us” in a place normally reserved for America’s “dead presidents.” Many of those who currently occupy these bills were simultaneously Founding Fathers of the “land of the free” and slave owners who profited from the forced labor of our ancestors. For us, this is something like a big deal.

But let’s not get too carried away like this guy, who may or may not be cracking a joke:

Harriet Tubman is replacin’ Andrew Jackson on the $20 bill. Racism and sexism have officially ended. We can all go home now, show’s over.

Fast forward a couple of centuries past Mama Harriet’s rescue missions and we have even more black men, women and youth being locked up in prisons and used as free labor today than were ever enslaved. We have regular reports of police officers in departments all over the United States beating, shooting and killing unarmed blacks and justifying their actions with the same excuses over and over – “I was afraid for my life” or “he reached for my gun.”

While many African Americans are living well, there are many others who struggle to make their money reach the high cost of living, no matter who is on the cover, and a segment who is so determined to stack those papers that they don’t care who they hurt in the process.

For all our progress and prosperity, we have a lot of internal and external problems to solve in order for African-Americans to be truly free. And it’s going to take a lot more than a 20-dollar bill buy our passage to that promised land. But this recommendation is a step in the right direction: