The riveting, true-life love story of a young African prince and his British bride is set to hit the big screen soon.

Described as “the love story that shocked the world” and as “nauseating” by former South African Prime Minister D. F. Malan, the romance and later marriage between Seretse Khama, prince of the Bamangwato tribe of Botswana (then known as Bechuanaland), and Ruth Williams, a young middle-class English woman, threatened to snowball into a diplomatic row between the U.K. and Botswana’s neighbor South Africa.

The year was 1947, when racism and discrimination were still deeply entrenched in British society and Jim Crow laws were still practiced in many parts of the United States.

Khama, a 27-year-old Oxford-educated lawyer from Africa, had fallen in love Williams, 24, who worked as a clerk with Lloyd Underwriters.

When the pair first met at a dance organized by the London Missionary Society, it was love at first sight.

Their romance, however, quickly came under extreme scrutiny from their respective families…and governments. 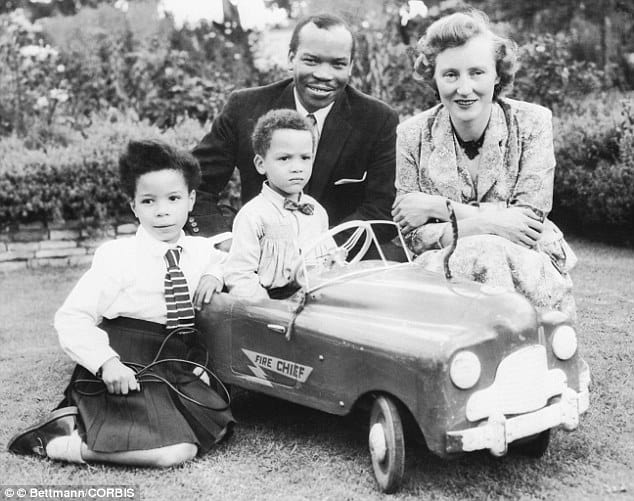 As a future king of his people, Khama was expected to complete his law studies and return home to ascend the throne.

And on William’s side, while her father, a former army captain, would firmly oppose the union, the British government would soon get involved, because it feared that existing relations with Apartheid South Africa would be fractured if it gave its blessings to an interracial couple.

In fact, a high-ranking British official reportedly told Williams, “If you go ahead with this, you’re going to bring down the British Empire in Africa.”

Because of the unrelenting opposition to their union, the young lovers married in a secret ceremony at a register’s office, after a priest who was meant to officiate their wedding was ordered by the government not to.

In spite of the heavy opposition, Khama would later become the first elected leader of Botswana and the love between him and his wife would last until death, with Khama dying in 1980 and Williams passing away in 2002.

The forthcoming movie about their epic love story will feature “Queen of Katwe” star David Oyelowo and “Gone Girl” actress Rosamund Pike, among a host of other world class acts.

se would later become the first elected leader of Botswana and the love affair between him and his wife lasted till death, Seretse in 1980 and Ruth much later in 2002. The forthcoming movie about their epic love story would feature David Oyelowo and Rosamund Pike among a host of other world class acts.