With a spear in his right hand and a shield in his left, bending slightly forward, and his shoulders raised, the Negro of Banyoles was half-naked with just a raffia decoration and a coarse orange loincloth, an African warrior displayed at a European museum as a wild animal.

In 1831, Jules Verreaux, a French dealer, traveled to South Africa, where he witnessed the burial of a Tswana warrior in the African interior. Later that night, Verreaux returned to the grave and dug up the body.

He stole the corpse’s skin, skull, and a few bones.

With a metal wire as a spine and wooden boards as shoulder blades, the French dealer put together the stolen body parts and shipped them to Paris, France, along with a batch of wild animals, the BBC reports.

Upon his arrival in Paris in 1831, Verreaux placed the warrior’s body in a showroom at No. 3, Rue Saint Fiacre.

At the time, Verreaux was widely praised for his bravery “amid natives who are as wild as they are Black,” and the African warrior attracted more attention than the giraffes, hyenas, and ostriches on display at the showroom. 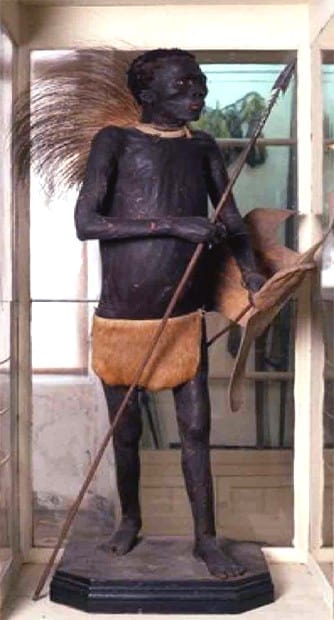 El Negro’s stuffed body in a European Museum. US Slave

In the 20th century, the African warrior, now referred to as “El Negro,” was moved to Banyoles Museum in Spain, where his revealing loincloth was replaced with a more modest orange skirt and his skin treated with a layer of shoe polish to make him appear blacker than he was.

As years went by, the presence of El Negro in Europe brought to the fore serious questions about the darkest aspects of Europe’s colonial past and people increasingly became aware of the fact that his body and grave had been violated.

In 1992, in the run-up to the Olympic Games in Barcelona, Dr. Alphonse Arcelin, a Spanish doctor of Haitian origin, wrote to El Pais suggesting that El Negro should be removed from the museum.

In his letter, Dr. Arcelin argued that the continued stay of the African warrior in Banyoles would rub visiting athletes the wrong way. But the Catalan people rejected the request, arguing that El Negro was a national “treasure.”

After protracted negotiations with the Organization of African Unity, Spain finally agreed to repatriate the African warrior back to Botswana for a ceremonial burial.

In October 2000, El Negro’s remains were buried in Gaborone, Botswana’s capital, in a ceremony attended by at least 10,000 people.

“We are prepared to forgive, but we must not forget the crimes of the past, so that we don’t repeat them,” the then-Minister for Foreign Affairs in Botswana Mompati Merafhe told mourners assembled at the funeral.

An autopsy done in 1995 revealed that the Tswana warrior was about 27 years old when he died; he probably died of pneumonia.