The Sigiri Bridge, which links Bunyala North with the South across River Nzoia in Busia county, was scheduled for completion by the end of July, according to the Nation, and being handled by Chinese Overseas Construction and Engineering (COVEC).

While it is unclear what caused the collapse, there are suspicions that construction work was rushed ahead of President Uhuru Kenyatta’s inspection visit to the project site two weeks ago.

Jerome Xzue Hua, COVEC project manager, insists, though, that the company adhered to required bridge-building standards and regulations and is “equally baffled” by the incident.

“This is very unusual because all the standards and specifications required by the employer were met,” Hua said.

“We have experienced engineers and we are equally baffled by what happened. We hope to find the root cause of the problem and rectify the matter.” 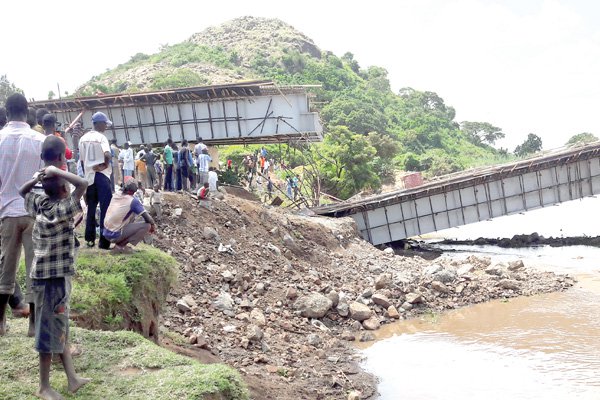 Construction work on the 100-meter bridge that has three spans — 25 meters at both ends and 50 meters in the middle — began in February 2016.

General elections in Kenya are scheduled for August 8th, and President Kenyatta, who is seeking re-election for a second term in office, has been ramping up the commissioning of several projects in what is widely considered a part of his campaign strategy to endear himself and his Jubilee Party to the electorate.

In May, President Kenyatta launched the 480-km Mombasa-Nairobi Standard Gauge Railway with technical and financial assistance from China.

Mr. Kenyatta described the railway as the single biggest infrastructural project in Kenya since independence, but critics say — at a cost of $3.8 billion — the rail project was comparatively overpriced.

Kenyan authorities say the building of Sirigi Bridge is necessary in order to prevent a repeat of the 2014 tragedy, when nine persons including a secondary school pupil lost their lives while crossing the River Nzoia.

During his inspection visit to the project, President Kenyatta said the bridge would significantly reduce deaths and make it easier for the residents to access markets, schools, and hospitals.