Former Ivorian first lady Simone Gbagbo has been acquitted of war crimes and crimes against humanity that were allegedly committed by forces loyal to her husband, former Ivorian President Laurent Gbagbo, during the 2010/2011 post-election violence.

The violence broke out in November 2010, after President Gbagbo was controversially declared the winner of a disputed presidential election, beating his main political rival Alassane Ouattara, who many claimed was the legitimate winner.

Mrs. Gbagbo, who was being tried by a court in the Ivory Coast, had been accused of heading an armed group that carried out violent attacks against opposition supporters.

The prosecution argued that the former first lady was responsible for supplying the group with weapons and attack helicopters.

Mathurin Dirabou, Mrs. Gbagbo’s lawyer, told Reuters after the acquittal, “We are happy. Since the start of the trial we proclaimed her innocence. The prosecution’s case against her was empty.”

Prosecutors now have 60 days to appeal the decision.

Human rights groups have faulted her acquittal, saying that it has left many unanswered questions about her role in the violent crimes. 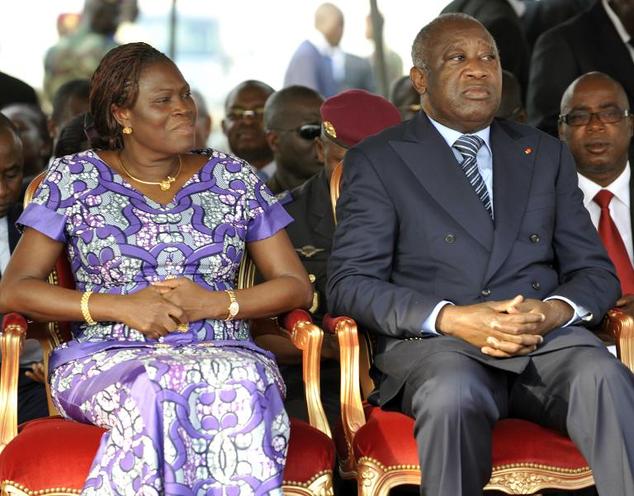 Former Ivory Coast President Laurent Gbagbo (R) and his wife Simone attend a ceremony on February 4, 2011, in Abidjan, to pay tribute to 32 members of the armed forces who lost their lives during post-electoral violence. Photo credit: Sia Kambou AFP/File

The former first lady and her husband were arrested on April 11, 2011, and put under house arrest in separate locations in northern parts of the Ivory Coast awaiting trial. They were later charged by a local court with economic crimes, including looting, armed robbery, and embezzlement.

In October of the same year, the International Criminal Court (ICC) — on the request of the Ivorian government — authorized its prosecutor, Luis Moreno-Ocampo, to investigate war crimes and crimes against humanity committed by different factions in the Ivory Coast during the post-election violence.

The ICC later issued an arrest warrant against the two, which saw President Gbagbo moved to a prison in Scheveningen, Netherlands, on November 30, 2011.

Although the ICC had initially wanted to try Mrs. Gbagbo, it later agreed to let her be tried in the Ivory Coast.

Since then, several powerful individuals loyal to incumbent President Alassane Ouattara have been indicted by local courts for crimes committed during the election violence, but none of them is yet to be arrested.

Last year, President Ouattara announced that no more Ivoirians will be taken to the ICC for their involvement in the violence – a decision that many have seen as a way to protect his supporters.

More than 1,500 people are estimated to have died in the violence that lasted for close to six months.