Former Liberian President Ellen Johnson Sirleaf made a remarkable move before the end of her regime. She courageously signed the original Domestic Violence Bill (DVB) which included a ban on female genital mutilation (FGM) otherwise known as female circumcision. 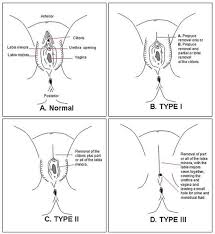 Image of female anatomy and explanation of the process of female cutting…photo credit: Unite Women

Female circumcision is a process which is mostly carried out in Africa, the Middle East, and Asia and can occur at any time after birth up until adulthood. It involves four significant types and this entails removing part or the whole portion of external and internal female genitalia with or without anesthesia.

The last part of the procedure involves infibulation; which is when a small hole is left for the passing of urine and other fluids. It doesn’t serve any medical purposes. In fact, female genital cutting causes severe bleeding, cysts, complications during childbirth, infections, lingering pain, complications with the flow of urine, and fatal bleeding. The World Health Organization (WHO) gathers that over 200 million women have been mutilated.

Still, it is performed to conform to societal pressures. The notion behind genital mutilation is the idea of beauty, decorum, and hygiene – women who don’t ascribe to this criteria are considered outside of the norm. In Mali, female cutting is referred to as bolokoli which translates into “cleansing your hands;” in the Igbo dialect, cutting is called iwu aru which is “taking your bath.” Remaining uncircumcised can mean social exclusion in the form of stigmatization and the inability to get married.

The fact that parts of the female anatomy are considered unclean or repulsive is problematic. Another imperative point to mention is that although there are no religious mandates which state that female cutting is mandatory, certain groups – such as Arabs and Africans justify the act by attempting to attach a religious obligation.

This goes to show that the psyche and cultural strongholds are powerful influencers. The belief that not being circumcised is equivalent to being unworthy and unclean far outweighs the medical consequences. Education and training are essential so that all women and men are fully aware of the cons of female cutting. Those who continue to perpetuate this act should be held legally accountable – and this is precisely what former President Sirleaf-Johnson attempted to do.

Though the aforementioned may not penetrate the minds of all, because individuals will still do what they believe is correct, it is vital that public figures or people with a strong political influence research the human right deficits present within their jurisdiction and proceed to make changes that benefit all citizens.

See the effects of FGM below: