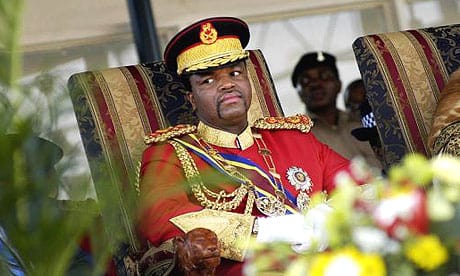 In a seemingly hypocritical demand, Swaziland King Mswati III (pictured) asked those in his country who live a lavish lifestyle to begin paying taxes, according to AllAfrica.com.

Last Thursday, King Mswati said before Parliament the “time has also come for the authority to fast track the programme of lifestyle audits.”

The request ruffles feathers because the King, who is the last monarch in Sub-Saharan Africa, pays no taxes himself, even though he is worth $200 million USD.

But it is not just how much he is worth that is at issue; King Mswati reportedly continues to increase his income even though the majority of the Swaziland population has been “diagnosed as malnourished” and living in abject poverty.

Seven in ten of Swaziland’s tiny 1.4 million population live in abject poverty with incomes less than US$2 a day; three in ten are so hungry they are medically diagnosed as malnourished and the kingdom has the highest rate of HIV infection in the world.”

The source of much of King Mswati’s income remains secret. In 2009, Forbes magazine estimated that the King himself had a personal net fortune worth US$200 million. Forbes also said King Mswati was the beneficiary of two funds created by his father Sobhuza II in trust for the Swazi nation. During his reign, he has absolute discretion over use of the income. The trust has been estimated to be worth US$10 billion.

It reported that MTN, which has a monopoly of the cell phone business in Swaziland, paid dividends directly to the King. He holds 10 percent of the shares in MTN in Swaziland and is referred to by the company as an ‘esteemed shareholder’. It said MTN had paid R114 million (US$11.4 million) to the King over the past five years.

And this persists even though government officials, such as then-Finance Minister Majozi Sithole, recommended that King Mswati’s budget be reduced by 10 percent in 2011.

Instead, though, his budget was increased by 23 percent that year.