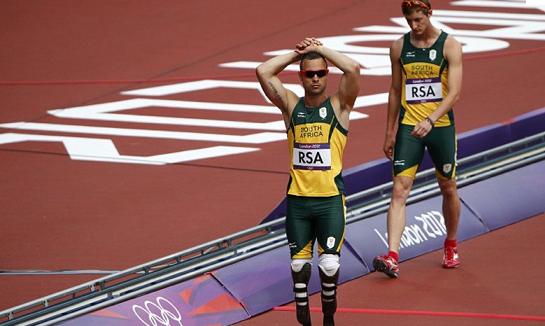 In the opening round on Thursday, surprised gasps and yells of outrage were heard in the Olympic Stadium as a Kenyan runner collided with South Africa’s Ofentse Mogawane as they made their way around the final bend.

Mogawane fell to the ground and clutched at his left shoulder as the baton rolled away.

Oscar Pistorius, also running for South Africa, was set to run in the next relay. He watched in disbelief as the baton rolled away. He then walked off the track.

Though all dreams for gold were seemingly dashed, within two hours Pistorius tweeted, “IT’S ON!! We in the FINAL.”

Team Kenya was disqualified from the competition when the referee ruled that Vincent Mumo Kiilu cut across too soon and caused Mogawane to fall. Kiilu had a spike mark on the back of his right shoe.

The Pistorius' team will run in Lane 9, according to the International Association of Athletics Federation (IAAF).

The IAAF also "agreed to advance the South African team even though they did not finish the race, considering that they had been severely damaged in the incident with Kenya."