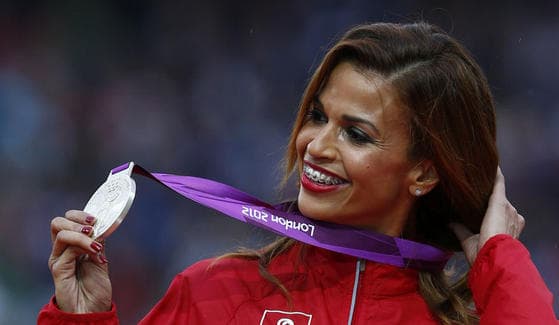 Ghribi is a middle and long distance runner who specializes in the 300m steeplechase. During the 2008 Games in Beijing, she finished 13th in the race. Keeping that in mind, she was determined to place this year in London.

She set a national record for her 9:08.37 time, finishing just behind Russia’s Yuliya Zaripova, who finished in 9 minutes and 6.72 seconds. Ethiopia’s Sofia Assefa took the bronze in 9:09.84.

Ghribi’s road to the Olympics has been a difficult one, marked by her surgeries on both feet in 2010, leaving her bedridden for most of the year.

She continued running, however, in September of that year.

Ghribi is ecstatic about her accomplishment, saying:

“The silver medal is a gift to all Tunisian and Arab women. I’m very delighted to have won it. It’s a sensational feeling,” said Ghribi.